Who all is playing?

Anyone else hunting shiny Pokemon?

Has anyone finished the main story line?

I finished the main story line a few weeks ago, I've just been breeding Popplio like mad and failing at doing it correctly. Haven't played it in a week or so though.

What are you looking for with your Popplio breeding? I'm breeding a pile of Eevees. I would really like a full set of her shiny evolved forms. Right now I'm in a never ending SOS battle. I keep putting it in sleep mode to sleeep, eat, live the rest of my life lol and now it's personal. I will do some battles then put it back in sleep mode when I get annoyed.

What are you looking for with your Popplio breeding? I'm breeding a pile of Eevees. I would really like a full set of her shiny evolved forms. Right now I'm in a never ending SOS battle. I keep putting it in sleep mode to sleeep, eat, live the rest of my life lol and now it's personal. I will do some battles then put it back in sleep mode when I get annoyed.
Click to expand...

I'm trying to breed for perfect IVs and it's slowly driving me insane.

My Shiny Eevee standoff has ended. I was just about to quit as I was almost out of supplies. I didn't get a Shiny Eevee to show up after the foolishly long battle I had waged, but this guy showed up and I had to do a double then triple take: 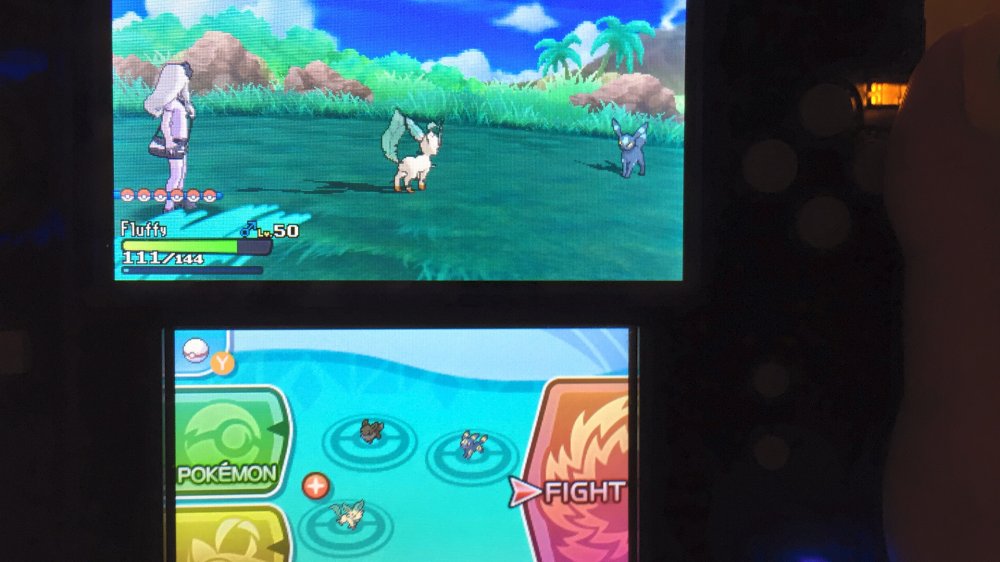 Welcome to the team Fluffy: 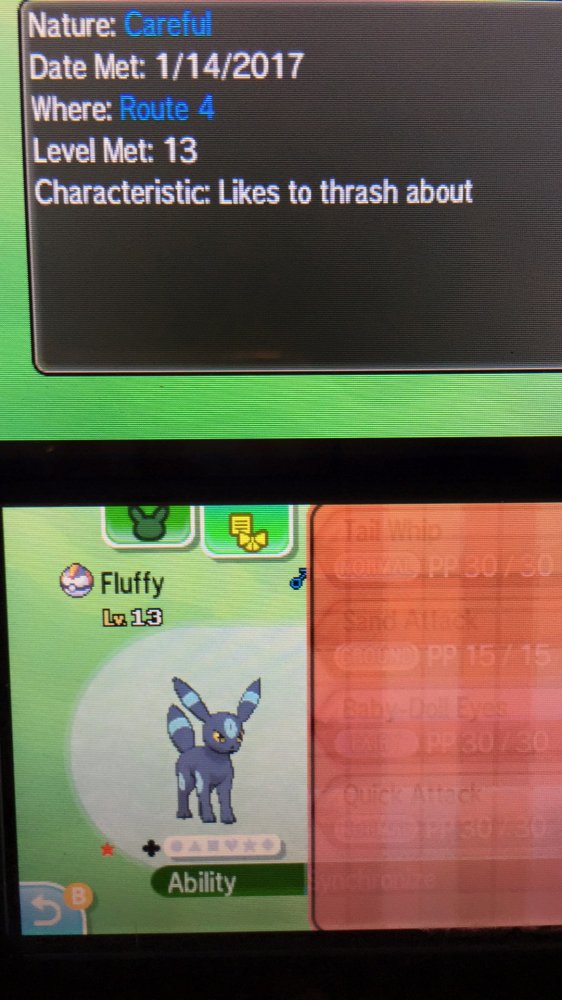 Dei said:
I'm trying to breed for perfect IVs and it's slowly driving me insane.
Click to expand...

I remember my boxes and boxes full of breeding dittos... Good times.

I've finished the main storyline (Lillie is the cutest video game character of 2016 and I will fight battle anyone who disagrees), caught all the UBs and guardians, and now I'm trying to develop a good team for the Battle Tree. Currently I've got an amazing Kartana, equipped with a Focus Sash and packing Swords Dance / Leaf Blade / X-Scissor / Sacred Sword. The Sash allows Kartana to almost always survive the first round, which I use to Swords Dance. Afterwards, it's time to clean house, because +2 physical attacks coming off a base 181 Attack stat is going to one-shot 70% of the Pokemon in the game. Even better, Kartana gets Beast Boost, which means its Attack is boosted one stage further for every Pokemon it KOs, which makes killing stuff even easier. Admittedly Kartana does have some weaknesses, for example the Sash won't help against priority moves, and while 109 base speed is good, there are still quite a few opponents who can outspeed it.

Apart from Kartana though, I don't really have any amazing Pokemon for the Battle Tree. Right now I'm working on developing a Dragon Dancing Mega Salamence, who's probably going to be packing Return / Earthquake / Dragon Claw as its attacks. Not sure who my third poke is going to be yet, I'm inclined to go for a special attacker, probably one packing a Z-move.

My plan is to take my time getting to the Pokemon league and fill in my pokedex. I have bred a ton of Eevees so I'm trading my freshly hatched ones for what I'm missing. I was getting each Eevee I deposited traded super quick so I decided to be silly and I asked for a Dragonite. That trade finished right away too. So did Flygon. Not sure what I should ask for next.

During the last part of my shiny Eevee hunt the other night, I was swearing that I'd never hunt them again but I know I will.

Shame on me....I went on another hunt. I was looking for Igglybuffs, but it was Jigglypuff that showed up shiny.

I am currently 28 battles into the Super Singles in the Battle Tree, and it's going very well. If I'm lucky I think I could go very far with this team. Though I acknowledge luck is often not on the player's side in facilities like the Battle Tree.

Swords Dance as the first move if I judge I can outspeed my opponent, otherwise I just attack directly. Either way, with a Focus Sash, I'll probably get at least two moves before Kartana dies, and that's usually enough to kill the opposing Pokemon. That means Kartana faces the next poke with a +1 or +3 to attack, and if my opponent doesn't have something that can outspeed Kartana then that's game over right there.

Pheromosa's base 151 speed means she can outspeed pretty much everything. The fighting bug comes in if something manages to take out Kartana, and revenge kills the threat as appropriate, given the outstanding coverage between her three attacks. I don't get the opportunity to Quiver Dance very often, but I like having the move there just in case, plus her three other attacks provide enough coverage anyway. Afterwards, she'll use her fighting z-move against the next pokemon, if she can, which usually nets another kill. (All Out Pummeling coming off of High Jump Kick has a base power of one hundred-frickin-ninety five)

When all else fails, and I need to stand toe to toe against my opponent, I bring out this monster. Do you know how scary Mega Salamence is? 90/130/90 defenses, plus Intimidate, means that he's almost certain to survive any attack thrown at him. Mega up and Dragon Dance. Now his ability is Aerilate, which turns Return into a flying-type STAB move with a 30% boost to its power. Coming off of a base 145 attack stat. And the 120 base speed is pretty awesome too. Plus Dragon Dance gives +1 to attack and speed. This guy is going to kill everything and look cool doing it.

Hmm, okay, I just realized my team is a bit weak to ice. Stupid Glaceon.

I have a whole box of baby Eevees. They're so cute!

I've been trading my baby Eevees for some of the harder to get Pokémon so I can fill my pokedex.

Just got the game today, played up to the point where I'm about to enter the first trial cave.

At the moment my team consists of Arcanine, Rattata, Pikipek, Steenee, Brionne and Togedemaru. Got lucky with a couple Wonder Trades to get Toge and Steenee early.

I'll probably swap Arcanine and Rattata out eventually, but the team's worked out pretty well so far.

Those are some awesome Wonder Trades!

Yeah I had a bad string of Magikarps and a couple Metapods.

I kinda felt bad, I got Togedemaru by trading out a Grimer.

BUT LOOK AT THIS LITTLE PUDDIN FACE

I love that face!! I had traded for him earlier n, but when I found him in the wild, I caught a few extras because they're so cute!

I finally made it to the battle tree and got access to the "judge" button. My poor Sylveon that is level 97 and has never left my party since I got my first poke-egg has only decent potential and her attack is "No good".

Man I was raging at this fucking Zubat last night. It had just enough HP that a non-crit wouldn't kill it, and it SoS'd for like 12 straight turns.

Upside, the xp was delicious.

Our son and I were scanning in QR codes and I went over to Tapu Village to get what came up on the island scan. I used False Swipe to get it to one hp and it decided to do a move with recoil. It died and island scan closed. Our son laughed at me.

I found an almost perfect Ditto !!

"and it still sucks!"

Just so you know, once you SOS 40 times, you are guaranteed a Pokemon with at least 4 perfect IVs.

That's what I did. My new buddy has 5 perfect and one horrible. It's special attack is "no good" but the rest are best or fantastic. I will try again to see if I can find one with a better special attack.

I was trying out my new Shiny Charm earlier as well and I got an awesome Shiny Umbreon that's nearly perfect.

Squidleybits said:
That's what I did. My new buddy has 5 perfect and one horrible. It's special attack is "no good" but the rest are best or fantastic. I will try again to see if I can find one with a better special attack.

I was trying out my new Shiny Charm earlier as well and I got an awesome Shiny Umbreon that's nearly perfect.
Click to expand...

You can probably use that one with fighting and normal types though.

Or with a second parent Pokémon with a good special attack stat?

At best, you can only inherit 5 IVs and the last is random, and you need an item (destiny knot?) for that.

Where do I get that? I could definitely use one.

Doh...most of my Pokémon are pretty rotten. That Judge button burst my bubble lol!

Thanks though. Getting that will be a huge help in getting some that aren't rotten. 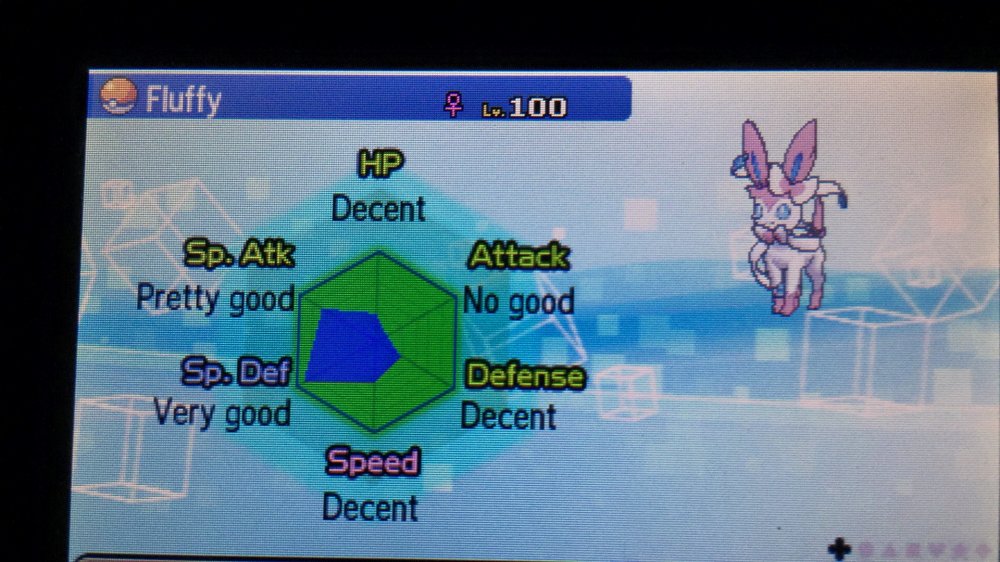 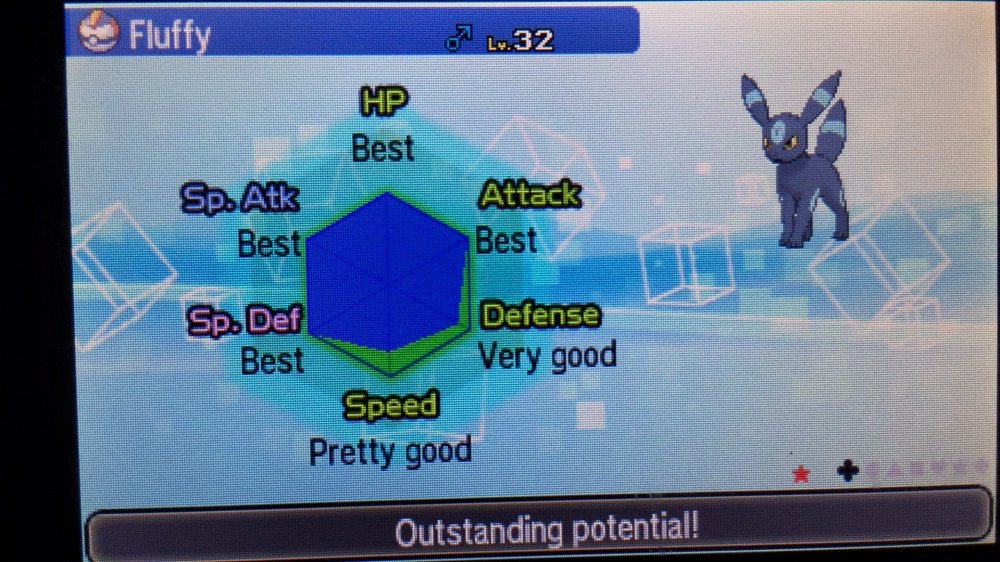 A bit of a pity Umbreon's defense is lower than max, since Umbreon is best played as a defensive poke, but otherwise that is one drool-worthy Pokemon there!
Show hidden low quality content
You must log in or register to reply here.
Share:
Reddit Pinterest Tumblr WhatsApp Email Link
Top