mikerc said:
So, is it just Zappit & Chris that are allowed to post here? Because I may have just picked myself up someone whose figure is almost as magnificent as he is...

WANT. Still waiting on BBTS to get their stock...

Staff member
There was a TON of new figures announced today. 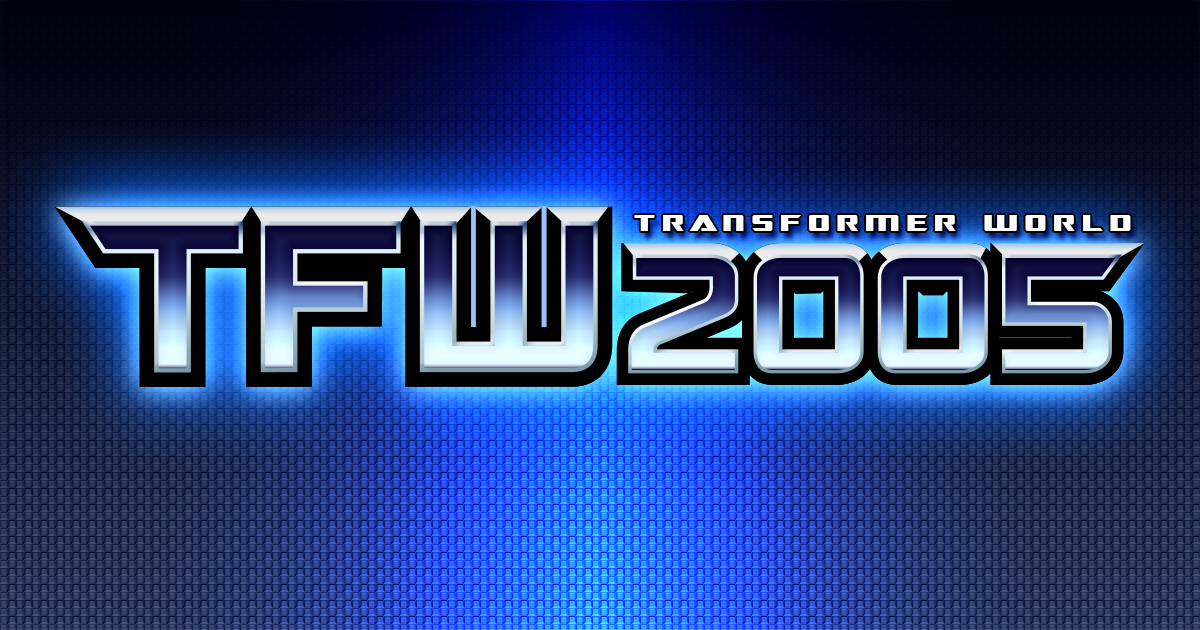 A bunch are Walmart exclusives - Elita-1, Bumblebee, Earthmode Soundwave, and the Netflix Siege repaint figures. It looks like the spoiler box will be a Nemesis Prime.

Amazon has two two-packs: Earthmode Ironhide and Prowl, and a Ramjet/Dirge pack.

There were also three new Generations Selects: Greasepit, Hubcap, and Exhuast. (Yes, that’s how they’re spelling it.) The Rotorstorm repaint of Spinister is also confirmed to be getting a new head sculpt, too, which is really nice.

Saw the pictures of the reveal. Bumblebee looks good. It's great they made him look like a VW. But him being a Walmart exclusive is annoying.

The third line of War for Cybertron was also revealed: "Kingdom".

I was lucky and was able to order the seeker 2 pack set.

chris said:
I was lucky and was able to order the seeker 2 pack set.
Click to expand...

Fantastic! Every time I’ve checked they’ve been out of stock. I was really trying for you, though.

At least the Coneheads are easier to get...

Zappit said:
Fantastic! Every time I’ve checked they’ve been out of stock. I was really trying for you, though.

At least the Coneheads are easier to get...
Click to expand...

thanks for looking out

the Seeker two pack has arrived (a lie, it arrived last week, three days after ordering !! I just forgot to post about it) They look really good. The colors of Thundercracker and Skywarp really pop out. 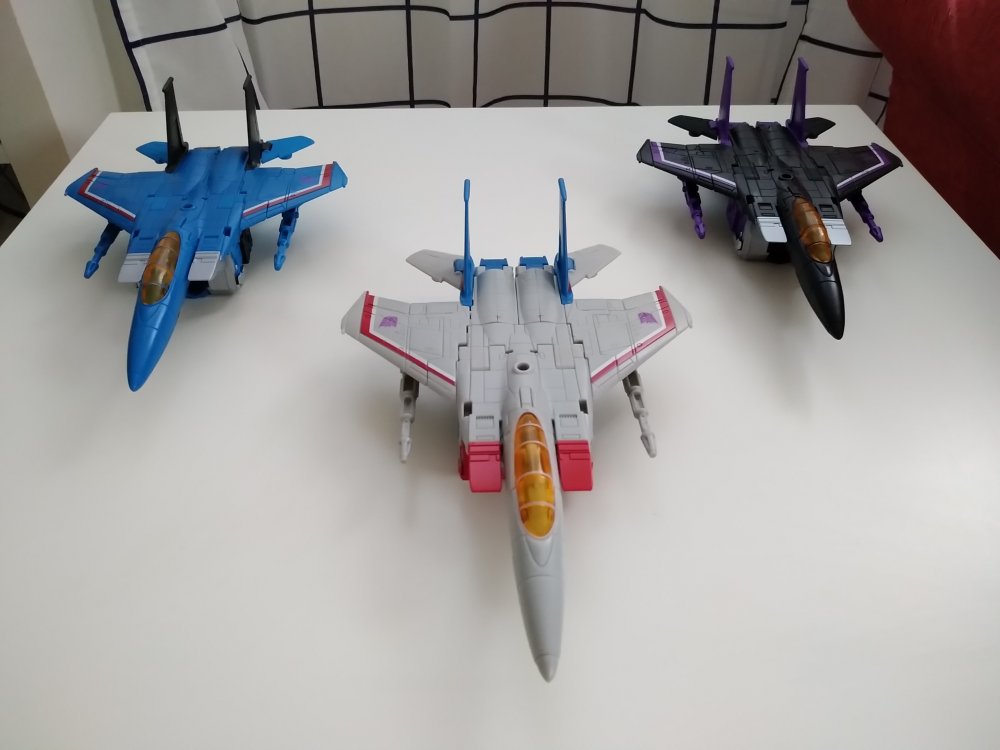 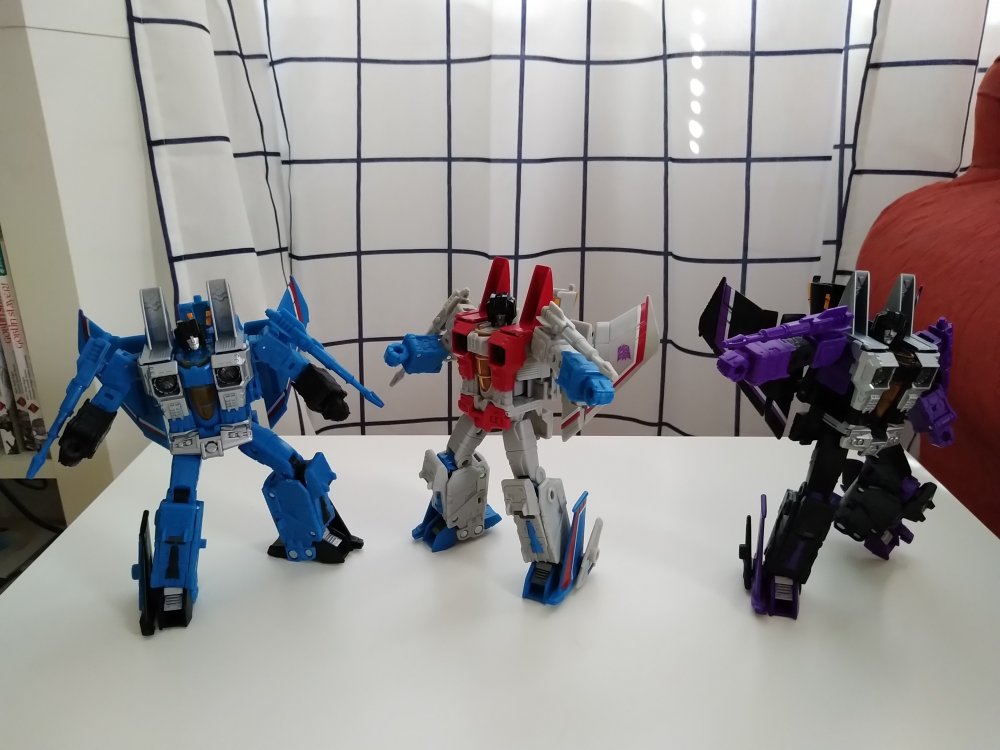 Got a new Earthrise figure, Bluestreak.
Wasn't so sure if I should get him but the new mold is really good. 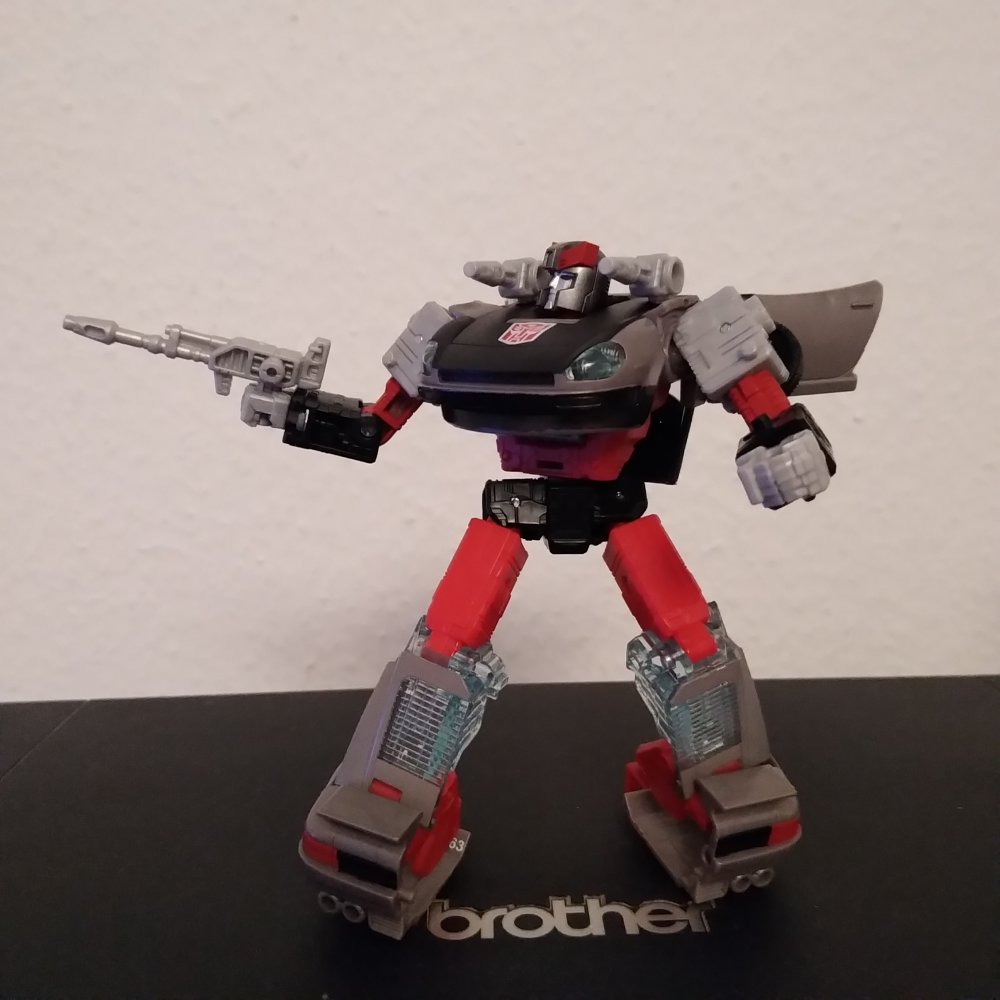 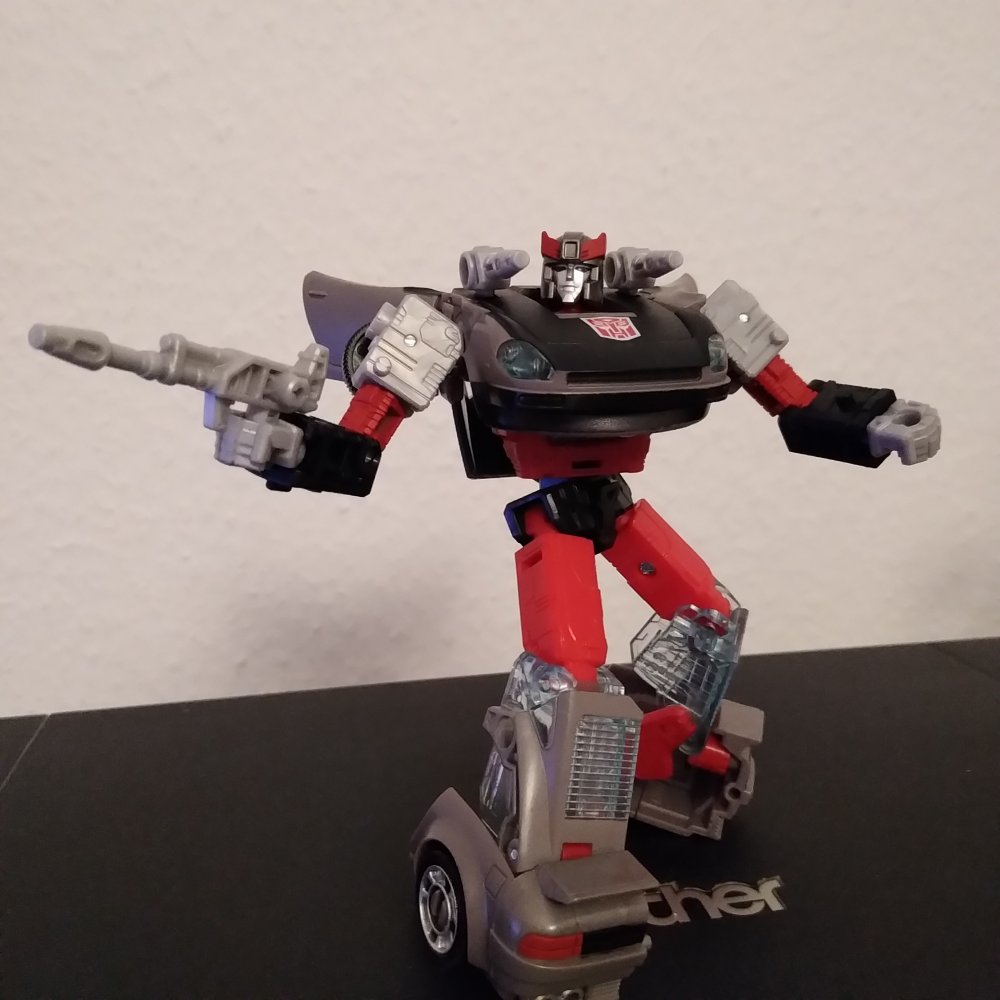 Staff member
He’s not available in the US yet, but every review basically is saying he’s a mini-Masterpiece figure.
B

Well if there’s anything the masterpiece line is missing, it’s a bluestreak sculpt

Zappit said:
He’s not available in the US yet, but every review basically is saying he’s a mini-Masterpiece figure.
Click to expand...

Oh, I absolutely agree with that. The engineering is simpler but the figure doesn't feel cheap. Lots of nice little details sculpted on it.

Speaking of masterpiece figures, I saw the first pictures of Beast Wars Megatron and he looks great. I'm not really interested in Beast Wars but maybe I will get him

Normally I don't go for the smaller figures but gods damn it if the little baby Prime doesn't just look adorable.

Staff member
I really hope tiny Prime is a sign of an improved Legends (small) class of figures. The third party offerings in that scale have blown away the official stuff for years, and it looks like Hasbro has been trying to step up their game.

I haven't updated in a while. She is not a bad figure but suffers from her original design. 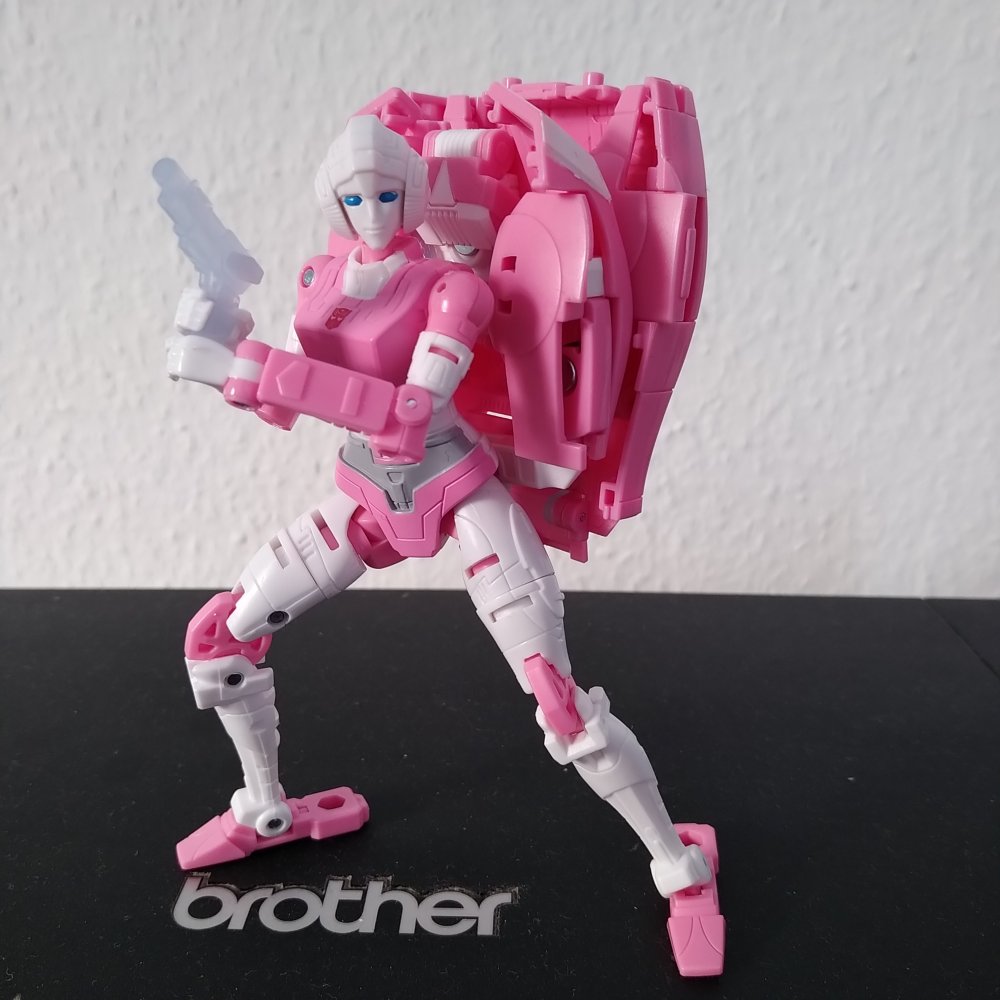 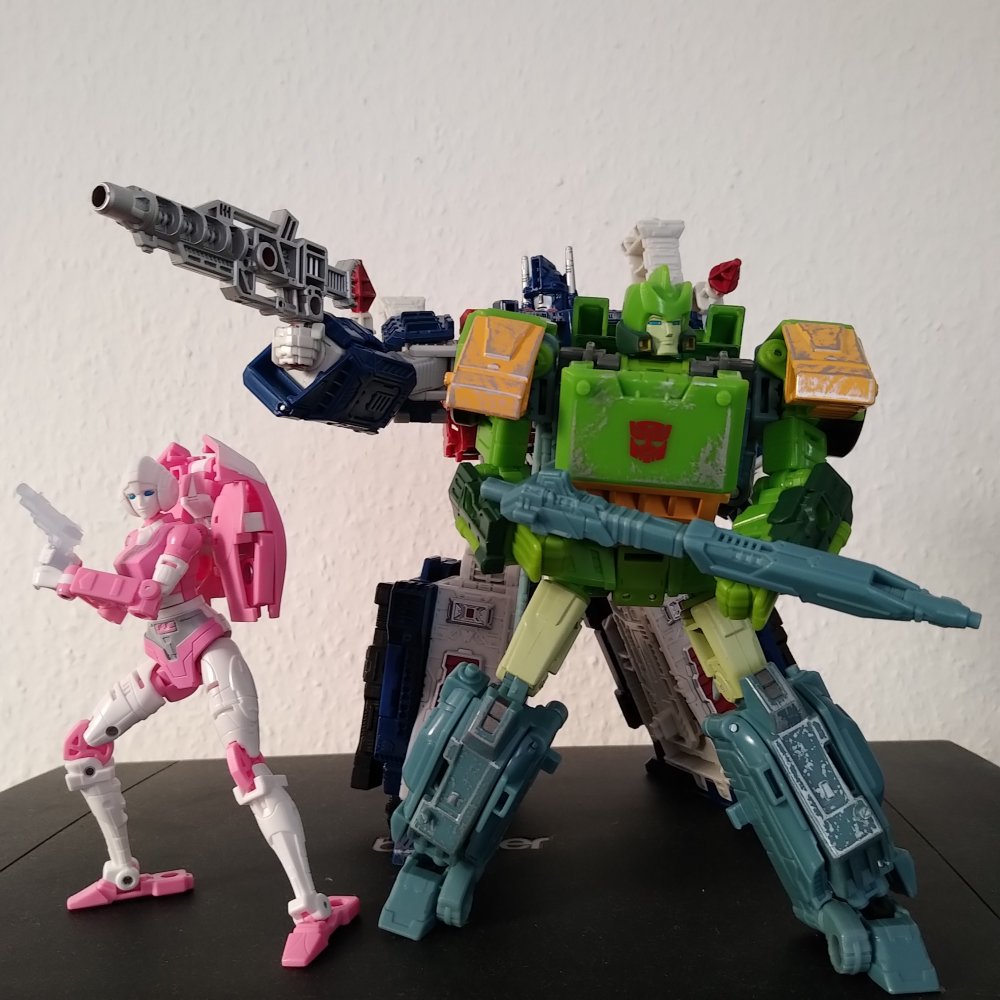 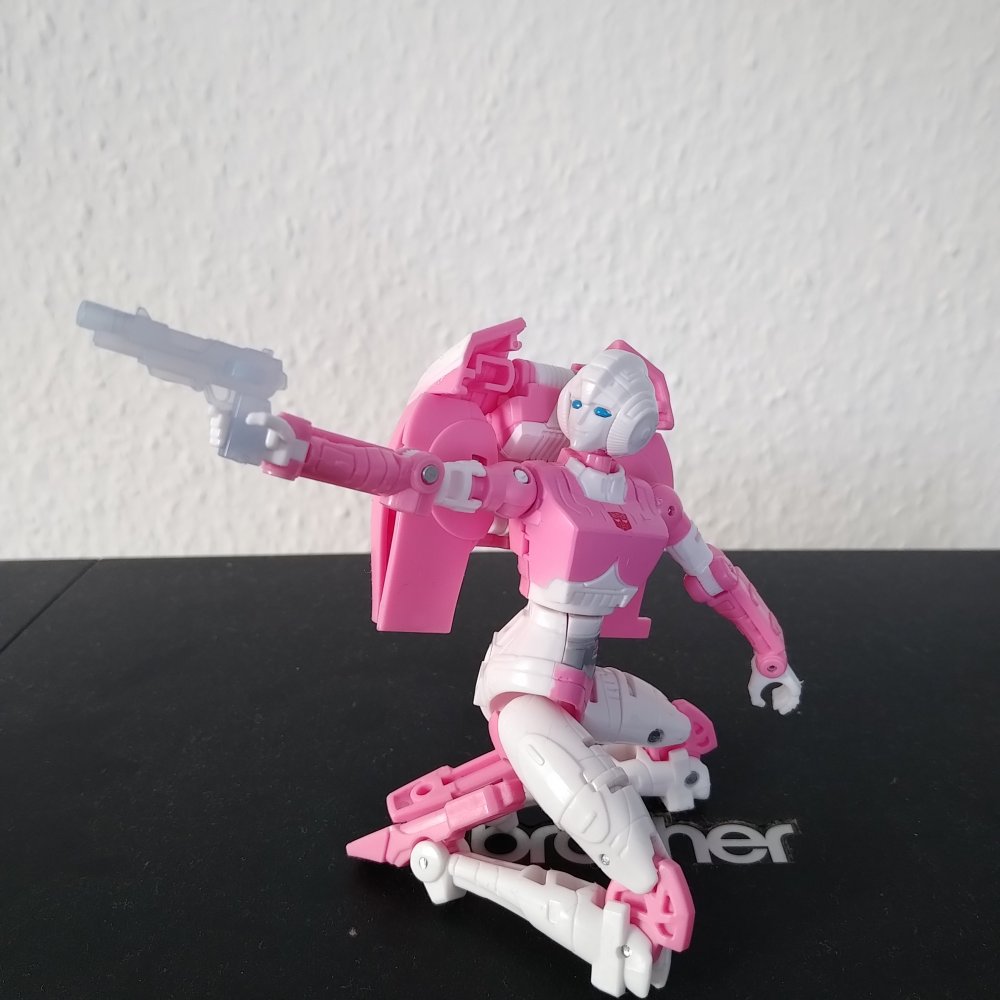 Staff member
I haven’t been disappointed by any Earthrise figures yet, but yeah, Arcee is an absolute shellformer of a figure. There’s just no way to work that bot mode into a car otherwise.

I haven't post pictures of the new figures I got the last months. Time to change that. My office toy this week is Sunstreaker 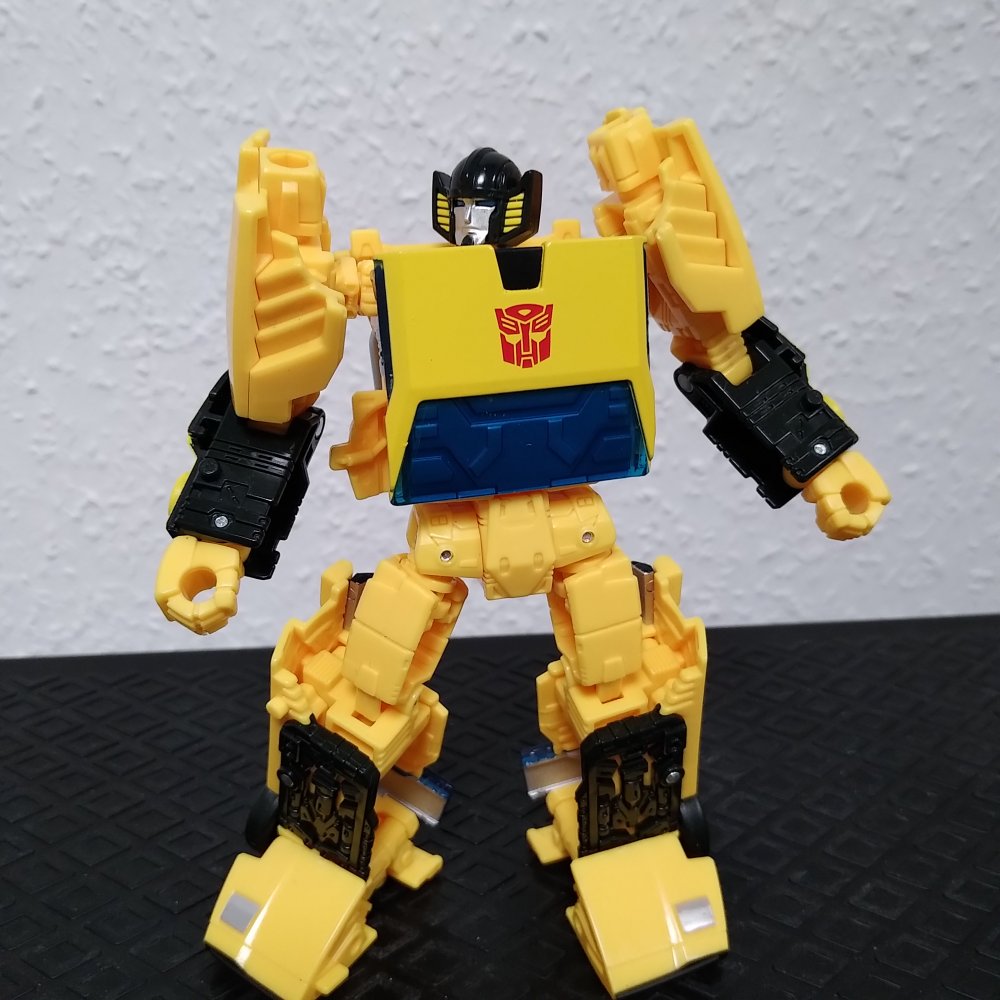 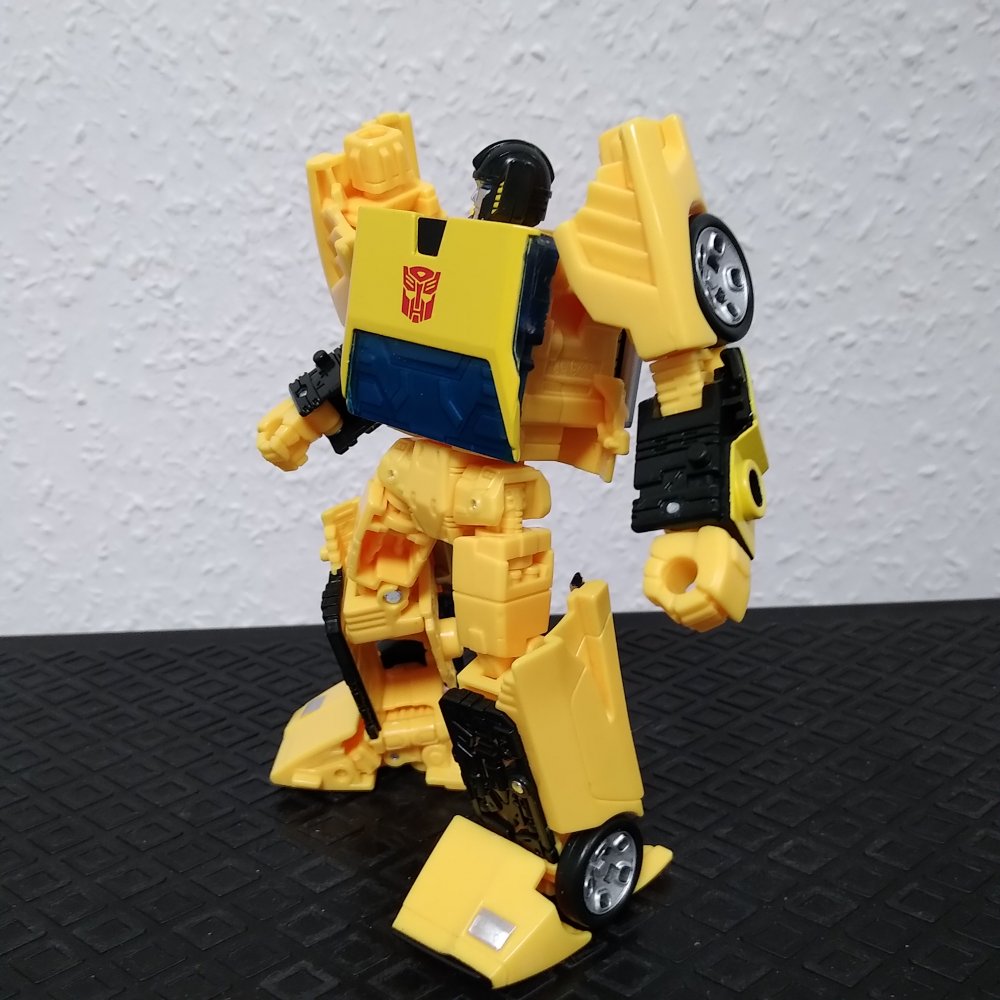 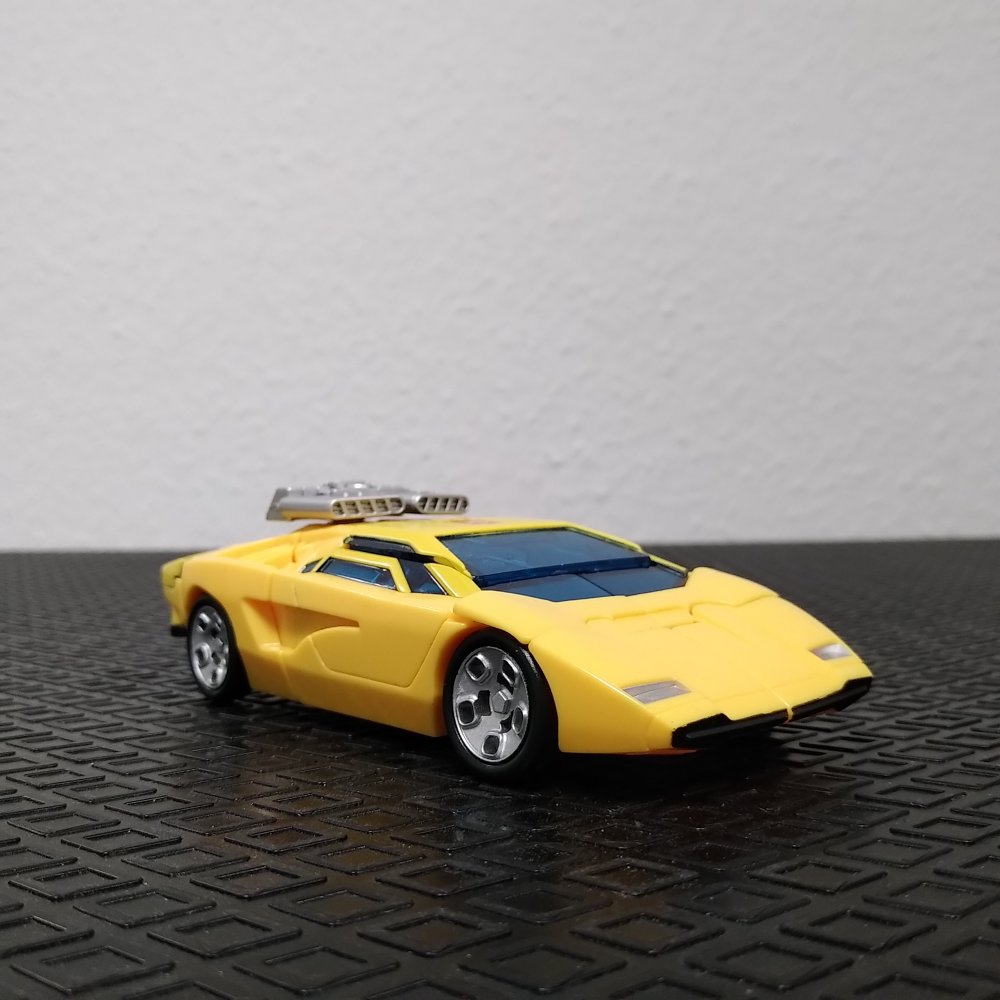 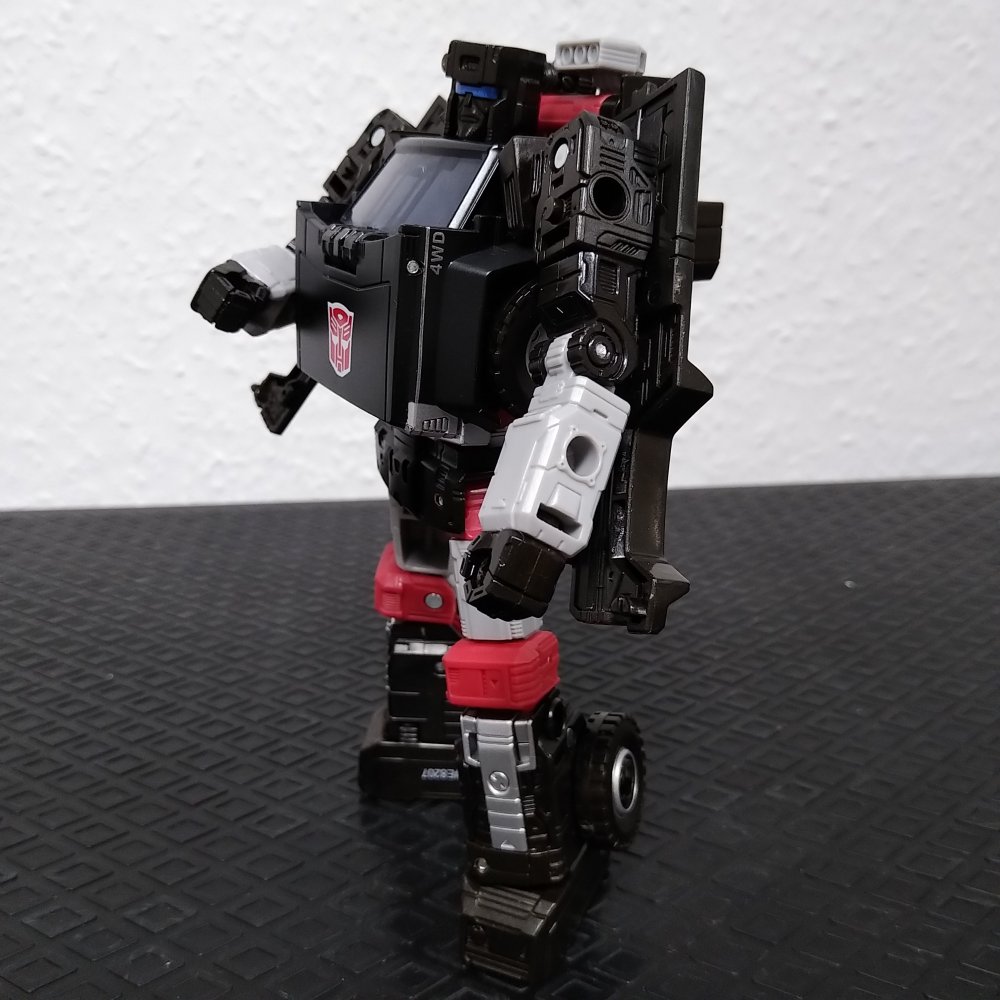 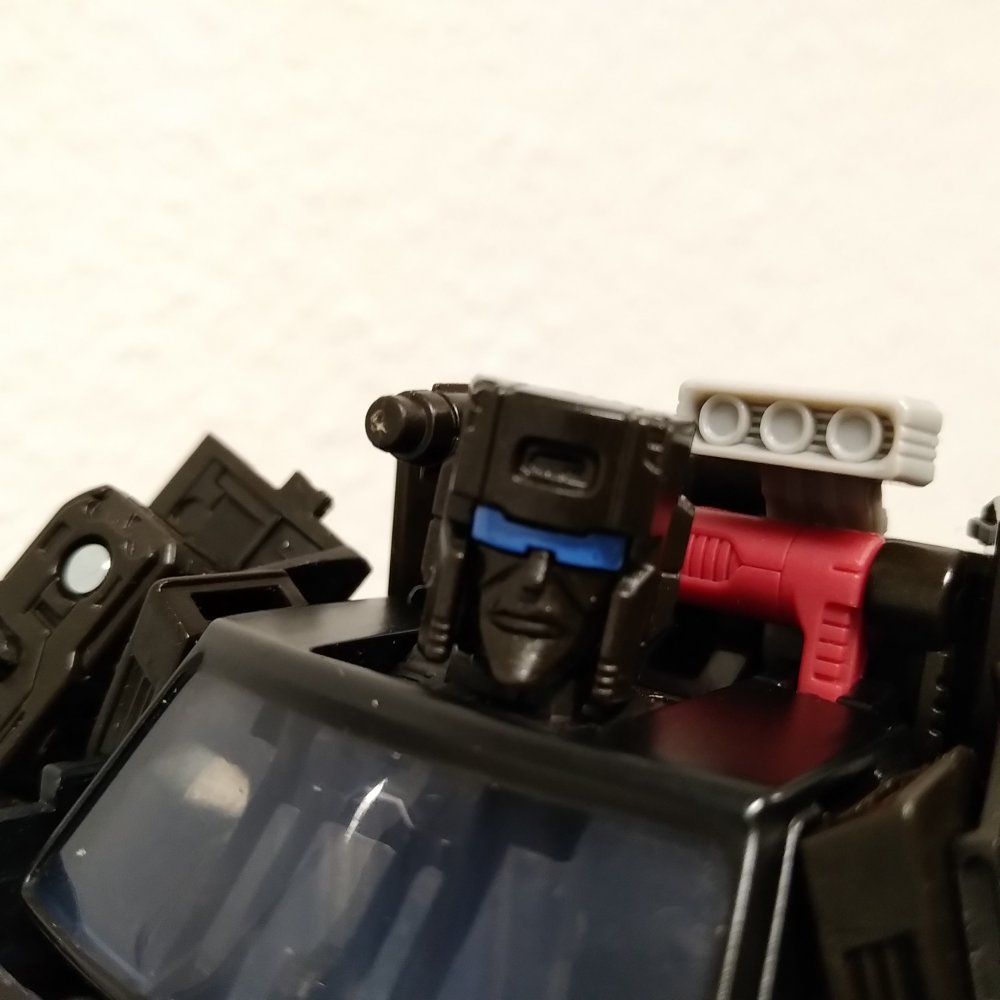 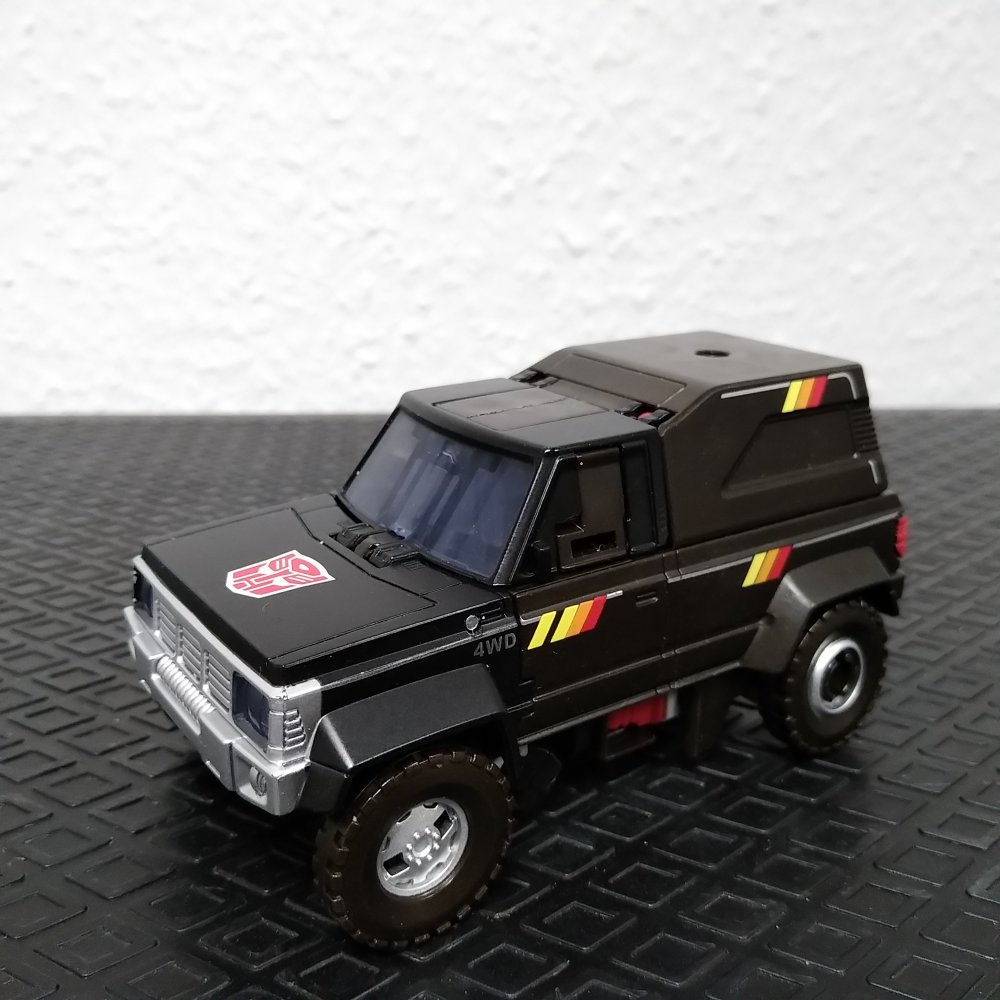 But his vehicle mode is also not to shabby.

The first pictures of Galvatron were leaked. His robot mode a few days ago: 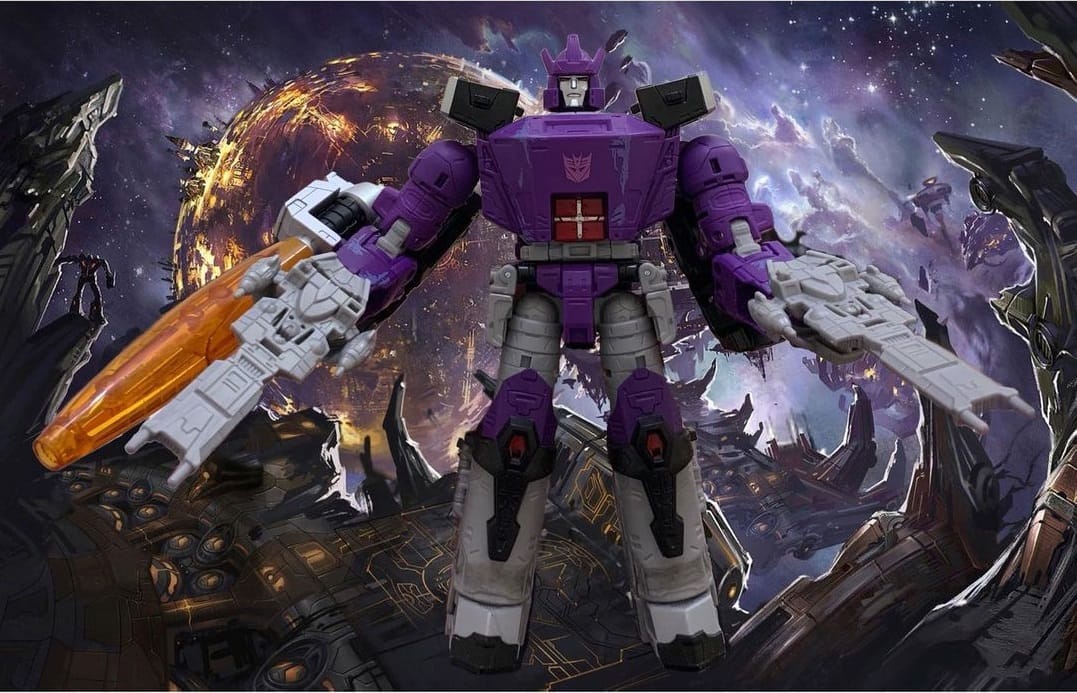 And his cannon mode today: 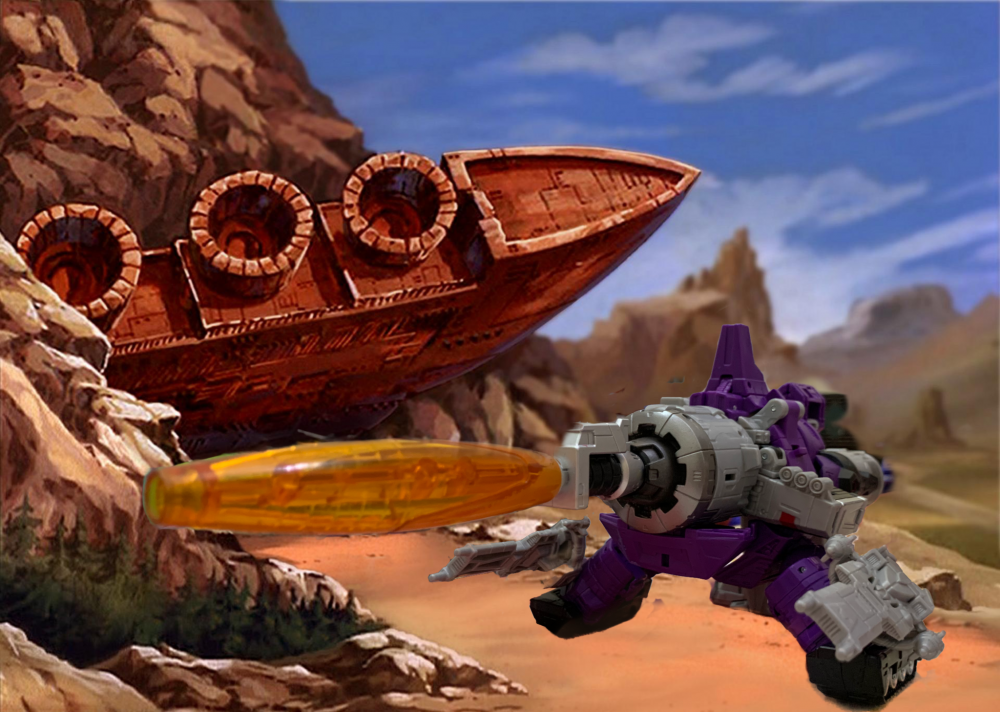 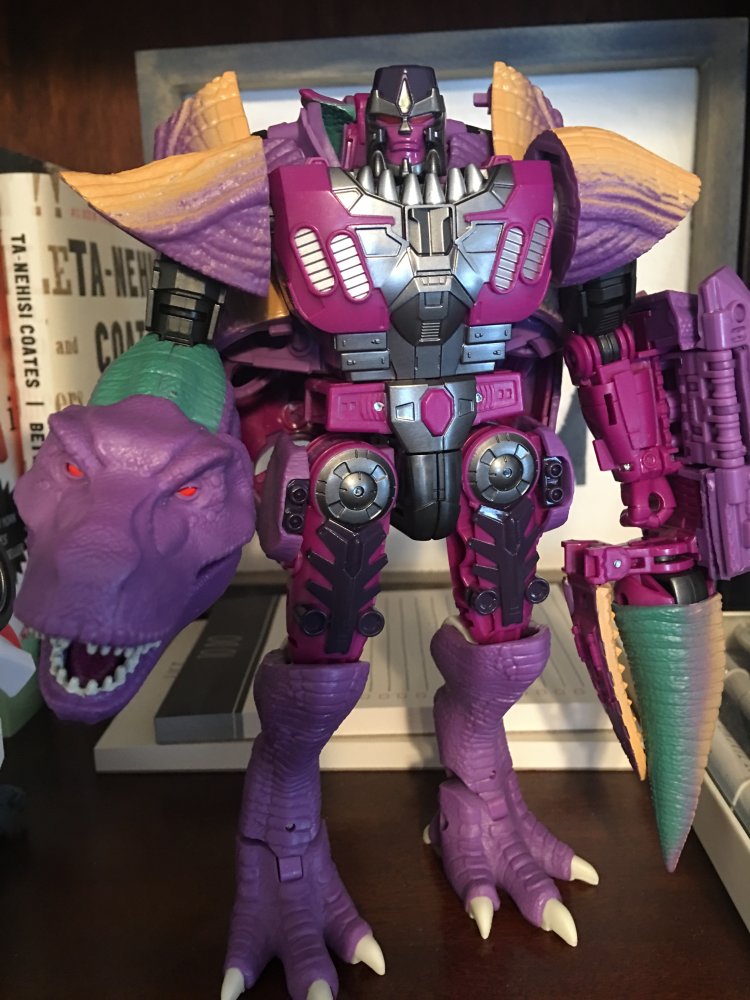 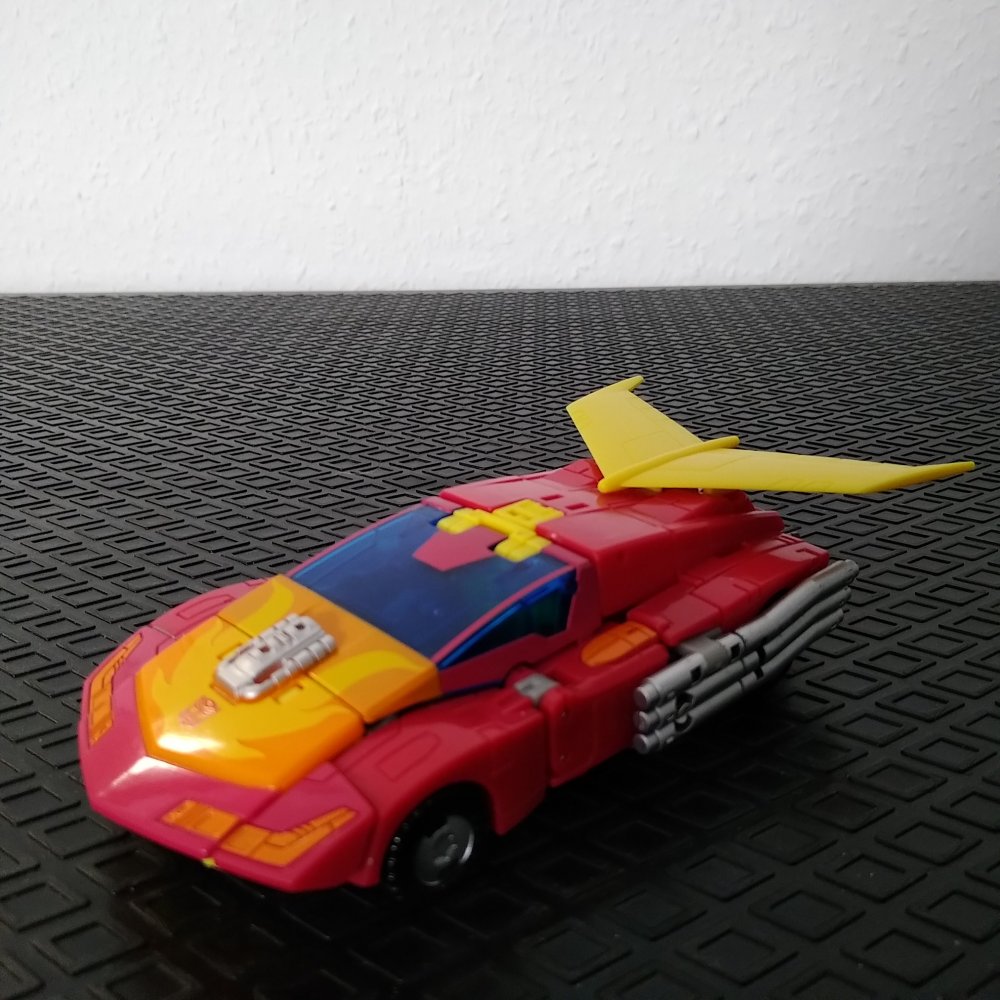 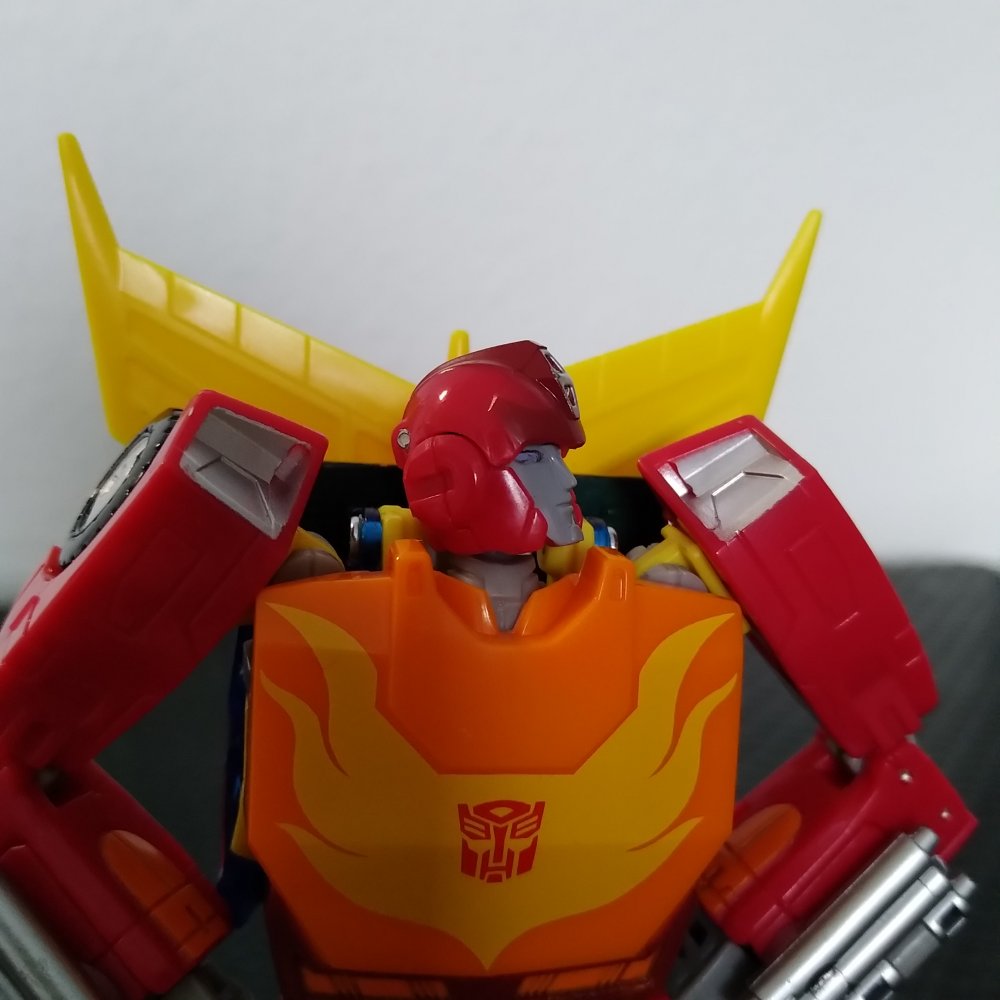 Another amazing figure with great pose abilities and a ton of accessories and gimmicks. Including his visor/shades. 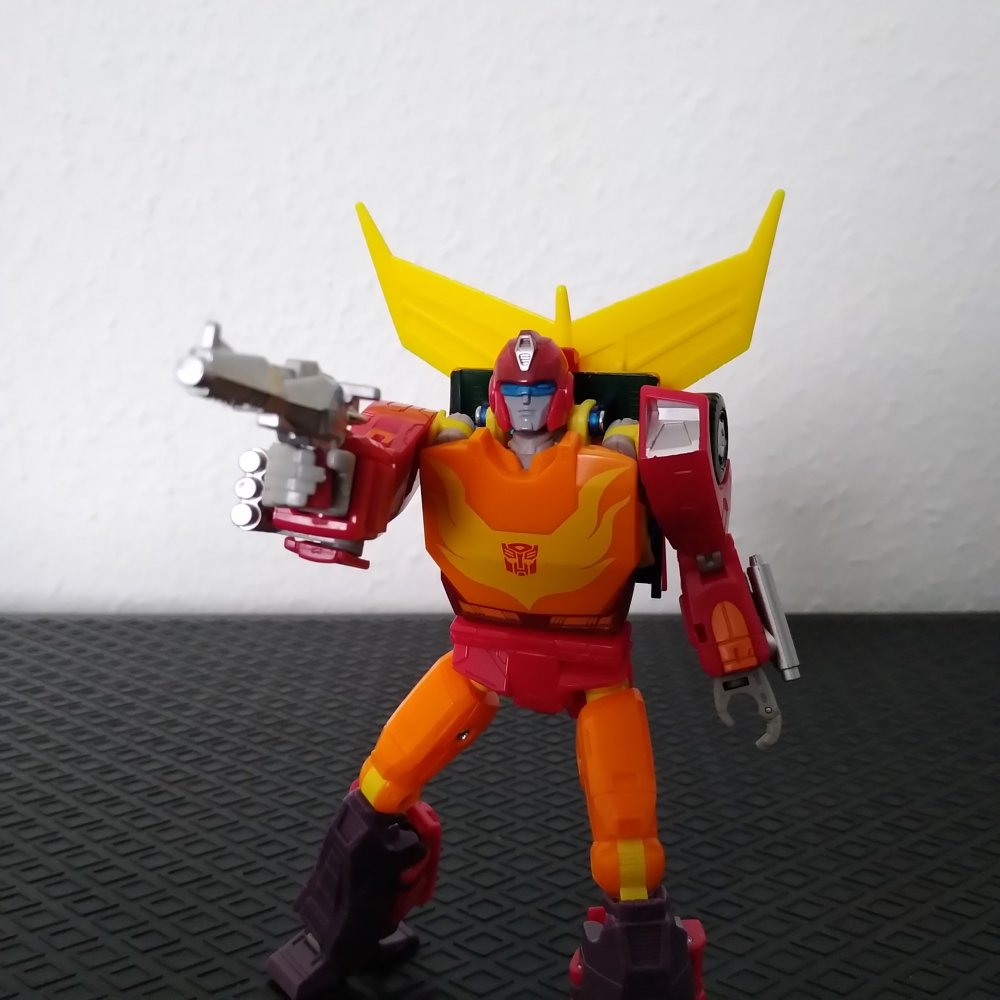 And of course a matrix with effect parts. 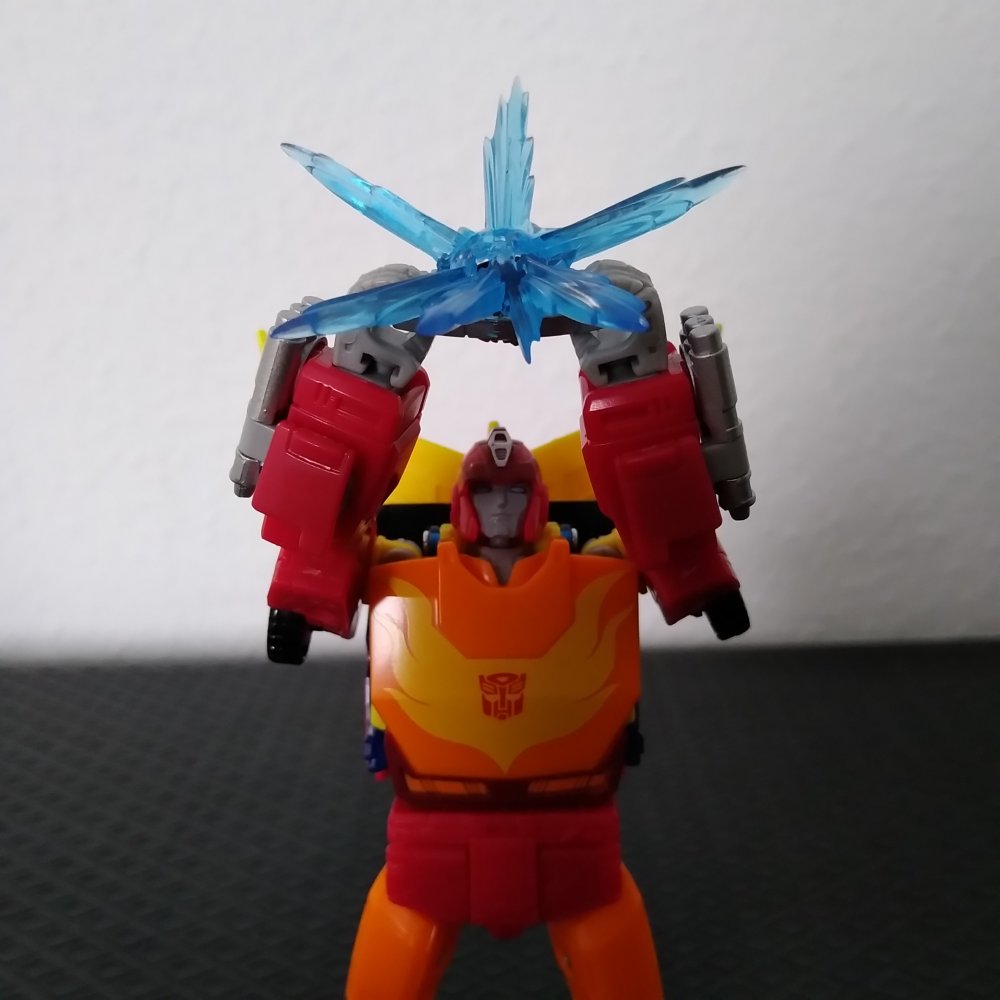 And than he turns into a overpriced bigger version of himself.

If I have a complain, it's the size of his tail fin. It's enormous, especially in car mode it's looking too big. But that's a minor issue

Staff member
I’m still okay with not owning it. Something that big is definitely going to suffer from loose joints within a couple years - the limbs would just be too heavy. The color changes around the planet-mode maw and the unpainted teeth really look throw off the whole look for me, too.

Owning Unicron looks like a chore. Price aside, he is a big guy and needs a lot of space. And I have neither the space or the will to spend so much money.

A short character for a short week. WFC Bumblebee, one of the more expensive deluxe figures, at least for me. The other one was Ratchet, stupid exclusivity. 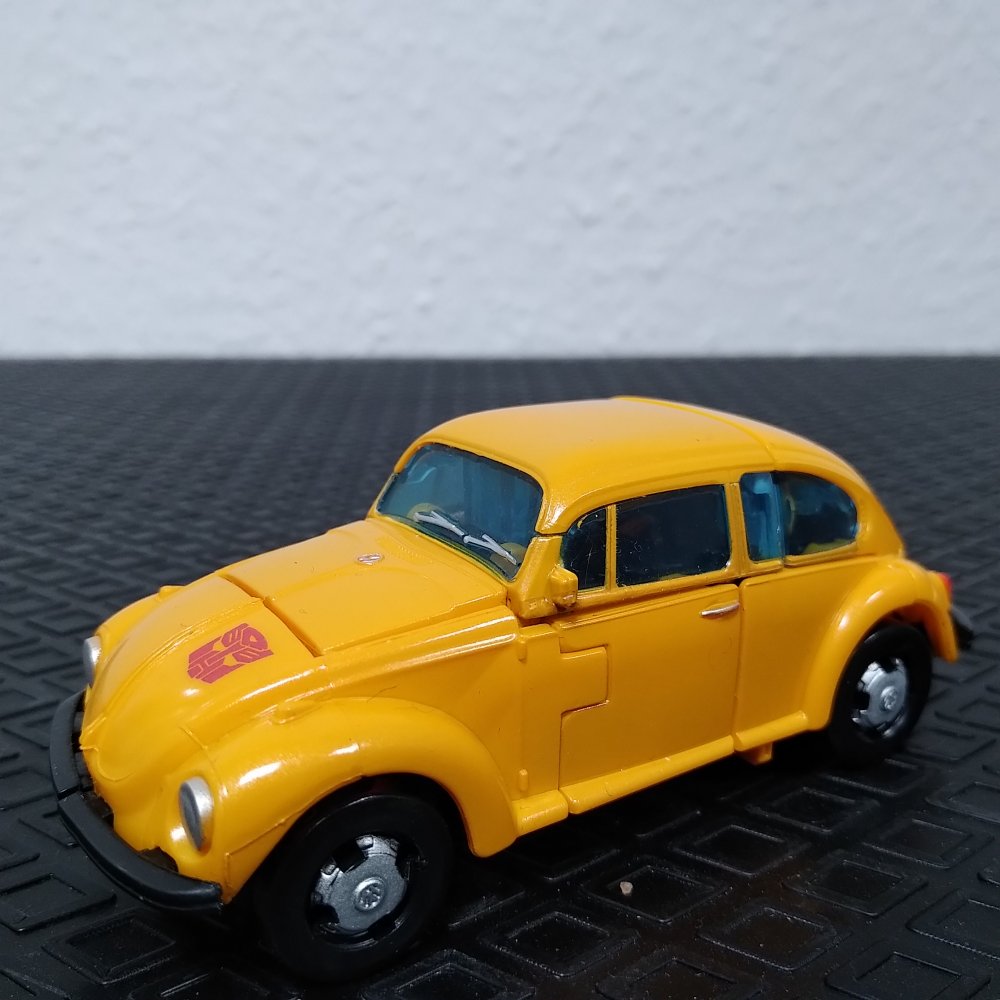 The fact that he is a licensed VW figure in the main line is already awesome. But all the little details is what makes him stand out. The VW logo on the hubcaps and the hood, the bumbers, the painted head and taillights, painted windshieldwipers and door handles and the single sidemirror on the drivers side 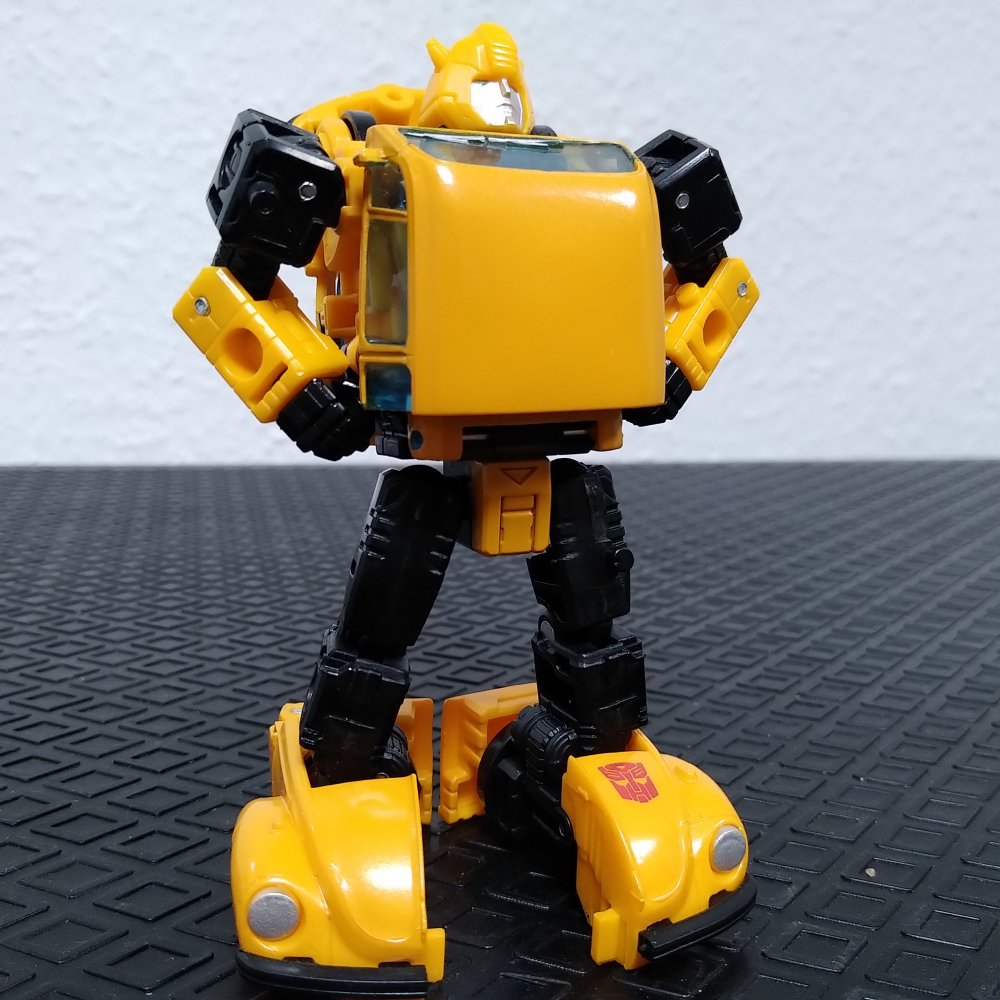 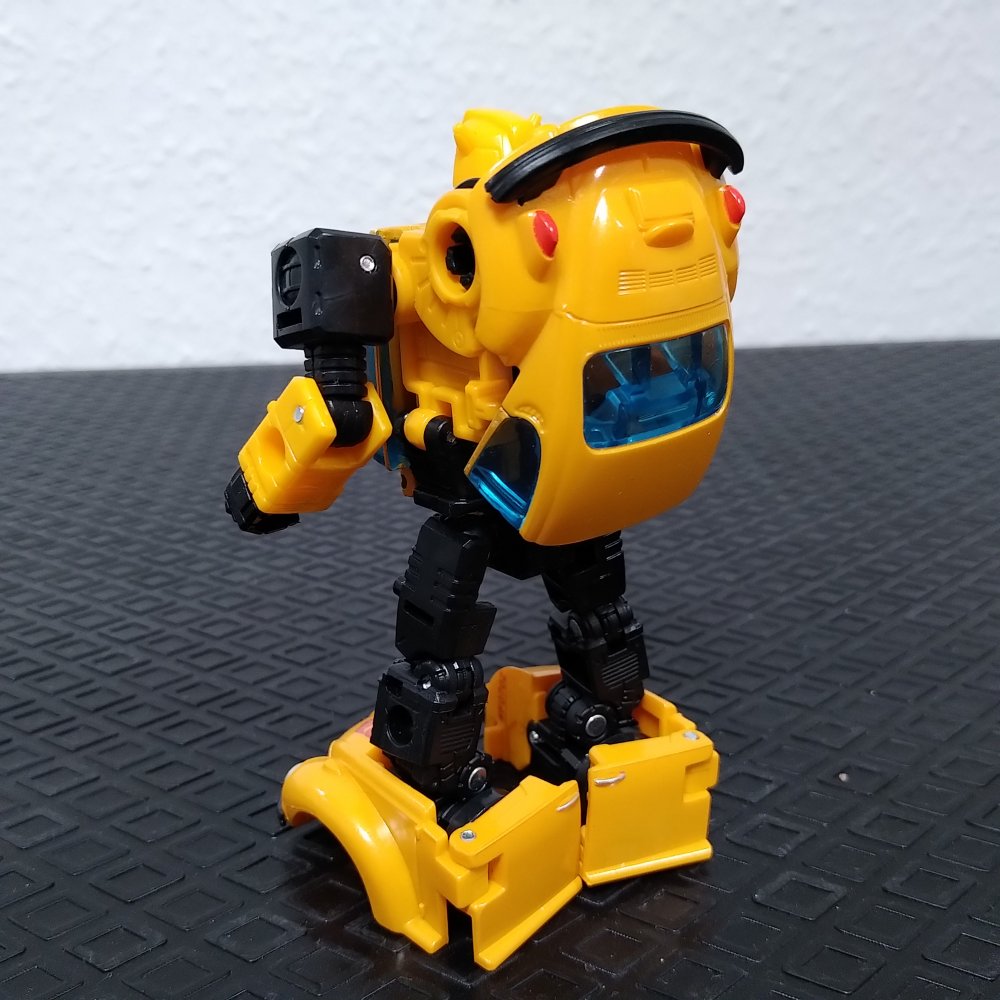 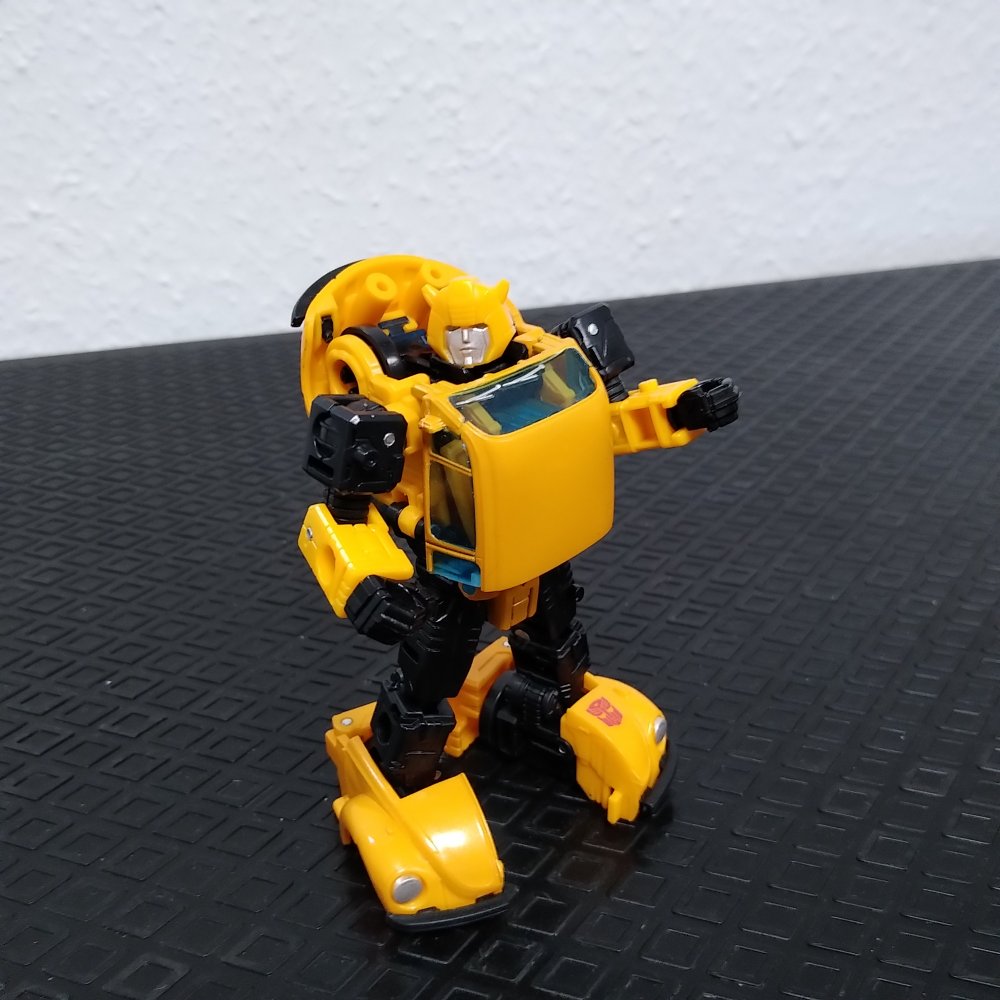 He is more a darker yellow than the pictures might suggest but that's ok. I wish his head would be more movable and his eyes a bright blue to give him a bit more live. The backpack/shield is ok, too. I mean it don't bother me as much like others.

Staff member
Lots of new stuff - the Arc as a titan! Black Zarak! For product inquiries and support, please contact Robosen Support via phone at 1-800-298-1623 or by email supportUSA@robosen.com Not available to ship to Quebec, Canada. Estimated ship date subject to change, items may ship earlier or later than anticipated without notice Payment will be...

For product inquiries and support, please contact Robosen Support via phone at 1-800-298-1623 or by email supportUSA@robosen.com Not available to ship to Quebec, Canada. Estimated ship date subject to change, items may ship earlier or later than anticipated without notice Payment will be...

Hang on - the voice activated command to get him to transform is "Convert"?

mikerc said:
Hang on - the voice activated command to get him to transform is "Convert"?

I guess they didn't want it to be mistakenly activated. "Yeah, this is my newest Transformer WAIT STOP"

Haven't posted new pictures of my new figures in a while.

First Cyclonus. He has a fun transformation. 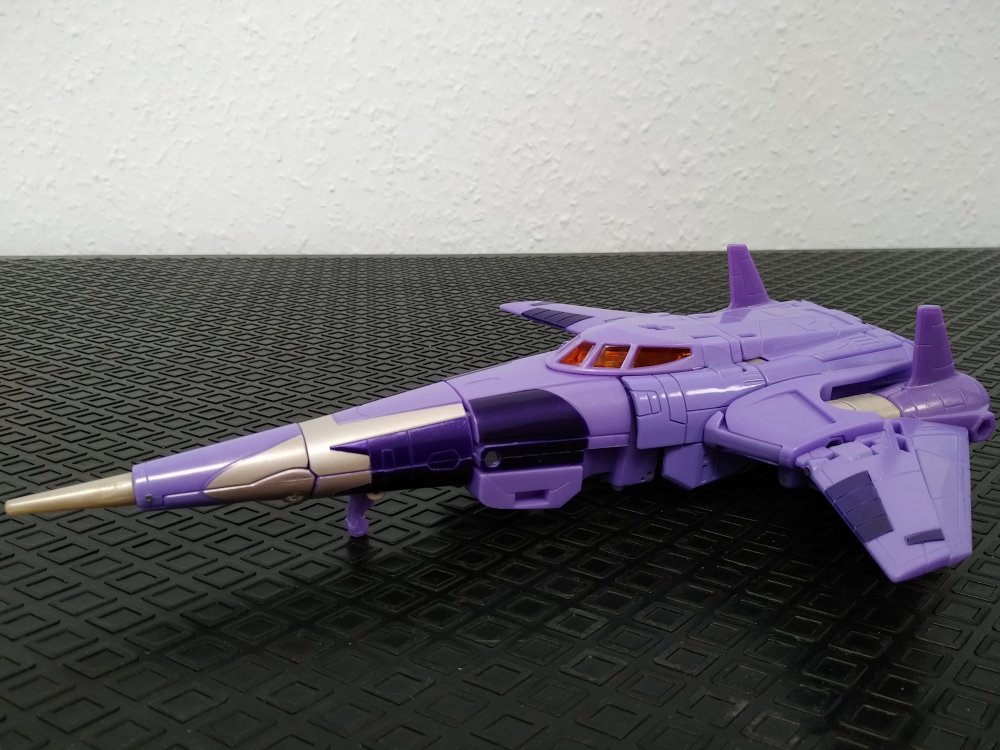 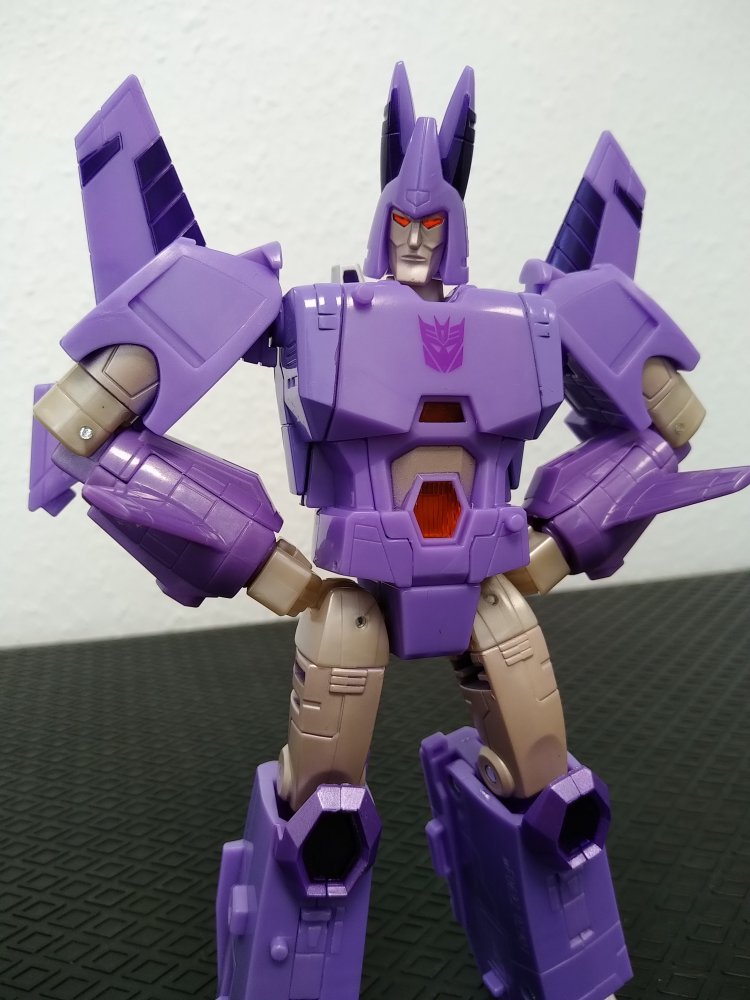 A couple of weeks ago the new toyline Transformers Legacy was announced and the first figures were shown. The new line will have fan favourite characters from other toylines. The first figures of wave 1 are Skids, Dragstrip, Prime Arcee, Prime Bulkhead, Kickback and Laser Optimus Prime.

Looking at the figures it's noticable that all looking like G1 designs. I'm a bit surprised. I thought that the Transformers Prime figures will be updated with new mechanics. And not new designs. Skids looks really good and I'm happy that we will finally get him.

We‘re also getting the Insecticons at Deluxe size. The retool possibilities means we might finally see Chop-Shop, Barrage, Venom, and Ransack. It would be a perfect Generations Selects entry.

I also like the Prime characters getting a modernized update to fit with the current lines. Plus, we are FINALLY getting a Blaster that’s in scale. Yes!
B

I got my bats yo 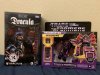