What are you playing?

The great thing about inscryption is that it does a great job of showing why people love card games. It presents you with a relatively simple game design, locks you within it, and then forces you to break it if you are going to advance.

... and then you get past the first level

Season 26 of Diablo 3. I started Thursday

T10. Thank you Diablo for the free armour

Part of me wants to and part of me is burned out. And then there's my two favorite classes having rubbish starter sets and all that and ugh.

I play on the PS5 now. I can have my simulated violence while being lazy in my electric blanket covered in cats.

Oops I saw the price of the soundtrack

Does anyone here play D3 on PS 4/5 and want to exchange power levels? I would like to start a DH and would be happy to PL on my WD.

Is there still no cross-play?

I don’t believe so, no. Which is super weird, because if Fortnite can do it lol….

Squidleybits said:
Does anyone here play D3 on PS 4/5 and want to exchange power levels? I would like to start a DH and would be happy to PL on my WD.
Click to expand...

I've hopped back onto my MUD recently. I'm starting to think some of the developers on this MUD don't have the faintest clue about game design.

This sounded great to me until I learned recently that Adaptive Shield's defense has a cap. How much is the cap? Why, it's +50 of course. In other words, I could use Adaptive Shield to eventually get an equivalent defense boost in one damage type to the Default Shield, or I could just use the Default Shield and get a +50 damage for every damage type right off the bat.

Who the hell thought this would be good design?

Staff member
When you've been struggling to min-max your party's synergy with wagons taking up 3 formation slots... and realize you have inadvertently (but happily) made your entire party female (yes, the Dragonkin is female too):

I just unlocked Vlahnya today, and something didn't sit right... 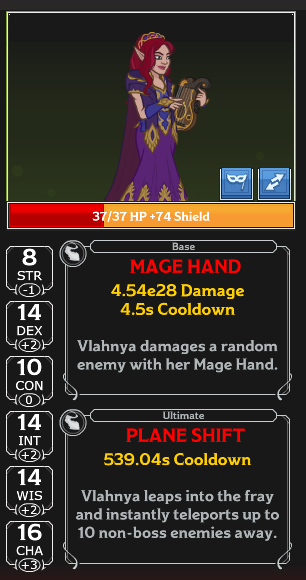 It says right there that it damages a random enemy.
That means it's not "direct."
/rules_lawyer

PatrThom said:
It says right there that it damages a random enemy.
That means it's not "direct."
/rules_lawyer

Which would also be against the manual definition. It's definitely a targeted spell that can move a 10 pound object 30 feet in 6 seconds.

Also it's kind of ridiculous they couldn't think of any other attack for a character to use than to misuse a cantrip off-label. I mean, even my other bard uses Vicious Mockery.

I picked up Jurassic World: Evolution on Humble Bundle recently, and I gave it a shot today.

Overall it seems like a solid enough park building game, though I feel like its mechanics are wide but also shallow. Find fossils, research them, build and upgrade, rinse and repeat. It's fine for me, because I'm in it for the building, but I can imagine some people might find this kind of gameplay to be a bit too superficial.

And, of course, I opened my enclosure of carnivores and allowed them to devour park guests at the first opportunity.

Velociraptors are assholes and I've decided, after three breakouts and around a dozen devoured parkgoers, that I'm not going to keep velociraptors any more.

Velociraptors are assholes and I've decided, after three breakouts and around a dozen devoured parkgoers, that I'm not going to keep velociraptors any more.
Click to expand...

You are now smarter than everyone in the movies

Ravenpoe said:
You are now smarter than everyone in the movies
Click to expand...

Except for the velociraptors.

You what's great? Playing Xenoblade Chronicles 2 and then losing 1,5 hour of progress because the game brigged itself thanks to a bug in the menu.

And of course there is no auto save.

That exact same thing happened to me and it pretty much soured me on the game.

It's like a more polished Valheim and I'm loving it so far. The building is definitely less customizable but I think overall looks better and is infinitely less clunky.
Last edited: May 25, 2022

Staff member
It's really hard to play solo. It almost forces you to coop.

Staff member
I was intrigued. Then I clicked. Uuuugh it's a 3rd person isometric action game.

Dave said:
It's really hard to play solo. It almost forces you to coop.
Click to expand...

I've been ok soloing until the level I'm at now, around 33. Could not get these bosses alone like I had been.

GasBandit said:
I was intrigued. Then I clicked. Uuuugh it's a 3rd person isometric action game.
Click to expand...

Not locked camera at least but yeah if you're not a fan of that style that'll put you off.

I accidentally killed death at the end of a stage of Vampire Survivors with the new weapon combo and I unlocked Red Death as a character and he's completely broken. Not an achievement though but just a random discovery.

My Time at Sandrock looks awesome!

And no, I don’t work for them lol.

Squidleybits said:
My Time at Portia’s sequel is out on Steam in early access

My Time at Sandrock looks awesome!

I pledged to the Kickstarter so I got a copy. But since it's still early into the Early Access, I think I'll wait a bit for a few more content updates before diving into it.

WELP-I can tell this game is gonna take over my soul, 3-D platformer, 2D animation, quirkyness galore-LOVE IT!

Ok, I've played through the campaign of Jurassic World: Evolution to the point where I've reached the fifth (and final) island. So now I can give a more nuanced review and commentary on it.

Overall, it's solid and fun enough, but I do have some complaints. First the good. As a park-building simulation and management game, it's pretty good. Building up your park is entertaining and satisfying, and the general gameplay loop (expeditions to find fossils, research them, hatch dinos, build up your park enough to unlock the next island) is interesting. The game itself is also pretty forgiving when it comes to money, in which it's easy to start turning a profit, which in turn means you generally don't need to worry about the nitty-gritty of income and expenditures and can just get down to setting up your park. And you are, after all, building a dinosaur park. That in itself is enough to add a few points to any review score.

Now the bad. There are some gameplay design decisions I didn't like. The buildable areas on the island are generally too small. Sometimes it felt less like "build a park" and more like "play Tetris with hotels and gift shops so that you can fit everything you need while also having enough space for enclosures". The issue of enclosure space turned out to be a major problem, because every dinosaur has certain space and environment requirements. For example, an Ankylosaurus needs 686 square meters of grassland and 686 of forest. A Baryonyx needs 7,968 square meters of grassland, 504 square meters of forest, and 2,868 square meters of wetland. The problem, however, is that there is no way for you to see how much space you have in your enclosure. The only way to tell if you've given a dino enough space or enough of the environments it wants is to breed it and see if it gets cranky. Other issues that aren't explained very clearly are the social vs population requirements, the fact that storms cause dinosaurs to get upset, and whether the percentages from buffs and debuffs are additive or multiplicative. (I still don't know about that last one, by the way. If one upgrade to my power station gives 20% more power but also introduces a 20% chance of power outages, and another upgrade reduces power outages by 45%, do I now have an 11% chance of outages or 0%?)

There are also other game design decisions I'd like to gripe about. For example, dinosaur visibility is one of the determining factors for your park's rating and the number of guests you get. However, dinosaur visibility is only counted at specific viewing galleries or similar structures. Having a metal fence, through which the dinosaurs are clearly visible (I could even take photos of the dinos with my ranger vehicle through the bars), does not count as having visible dinos. The missions given by the park directors (divided into Science, Entertainment, and Security) often did not make much sense. For example, my Security director would sometimes give me a mission to dig up certain fossils. Surely that would be something the Science director should be telling me to do? And some of the missions are deliberately scripted to make them hard in ways that violate the game's internal logic. For example, you may get a mission that says "Keep this dino safely inside an enclosure for 3 minutes". Normally if an enclosure has everything a dinosaur wants (food, water, environment etc) then it will be content and will not try to break out. However, during these missions the game will deliberately cause the dinosaur to become agitated for no reason, and it'll start attacking the fences continuously until it makes an escape.

Anyway, while I do have some complaints, on the whole this game is decent enough. I'd give it a 6 out of 10, with its score dragged down almost entirely by silly gameplay designs and a lack of certain QoL features. If the sequel has fixed these issues then I might get it someday.