I'm guessing it'll probably be reduced on appeal, but still, even one season without CL is probably going to lead to a mass exodus.

European Championship's been postponed to June 2021 due to Covid-19.

Couple of leagues have started up again with some rather interesting ways to get around the lack of fans in the ground. In Germany Borussia Monchengladbach have elected to fill the stands with cardboard cutouts 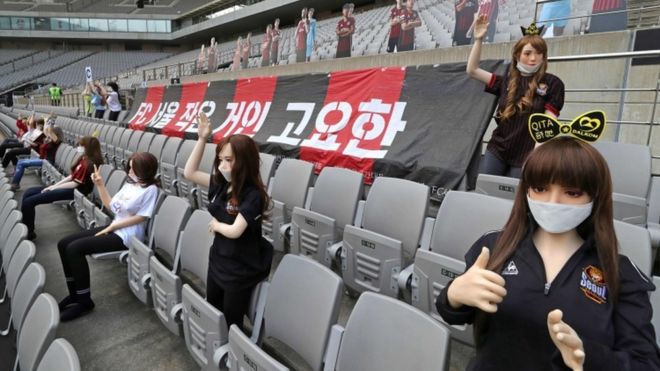 Honestly the only real surprise here is that this is happening in South Korea & not Japan.

mikerc said:
And in South Korea FC Seoul are using what they're calling "premium mannequins"
Click to expand...

Bundesliga is back, albeit in empty stadiums with piped in crowd noise. US viewers can watch live via Fox Sports.

@jwhouk, I didn't even notice I'd done that until you pointed it out.

Today I learned that Luis Suarez has become Barcelona's third-highest goalscorer in the club's history, at 195 goals.

Ahead of him, in second place, is Cesar Rodriguez at 232. He played in the 1940s and 50s, so it's quite possible some modern fans haven't heard of him.

In first place is a guy you've probably heard of, though. Lionel Messi has 629 total goals for Barcelona. That's right, Messi has more than triple Suarez's tally, in third place.

Not to downplay Messi's achievements but when comparing those 2 it's worth remembering that Messi has spent his whole career at Barcelona where Suarez was at Ajax & Liverpool before that. Although for comparison Suarez scores a goal on average every 1.43 games for Barcelona & Messi scores on average every 1.15 games. Meaning over the typical 38 game La Liga season Suarez scores 26.5 goals every season & Messi scores 33. Which is still crazy high numbers for both players.
You must log in or register to reply here.
Share:
Reddit Pinterest Tumblr WhatsApp Email Link
Top