Before and after photos

Staff member
This is more of a rant than anything else. I saw this "before/after" picture of a woman on Facebook. The two pictures were identical. It was a very nice statement about a person not being under obligation to be thin to please others. It's true, and it's a good thing to keep in mind. I definitely do.

Do we have to attach the word "trigger" to every goddamn thing now? It devolved into this rant about how before and after pics are violent, triggering, bullyish things to post that make overweight people feel like they have no value. And I'm not talking about people who post obnoxious things like "I have 5 kids--what's your excuse?!" Or "I'm so glad I'm not gross anymore..." I'm talking about the people who say "I'm celebrating the fact that I set out to do something, and I did it!"

I'm overweight, and I've been obese. One thing I've always been good at is that I don't make other people's goals or standards my problem. I might feel disheartened when I see thin people sometimes, but I also feel happy that someone got where they wanted to be.

So maybe if someone is posting that *they* are happy that they reached a goal, that's the whole message. There's no hidden goddamn agenda to make you feel bad. Maybe part of life is dealing with your own disappointments and insecurity without blaming others.

I don't care what people want to look like. Beautiful people are everywhere. I'm just getting really tired of watching people project their insecurities on everyone in the name of social justice.

Anyway, rant over. Back to kettle bells. I suspect I saw the exact same picture today, @Cajungal. This one? 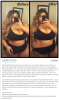 It reminded me of some great past / reading on the triggers (and safe spaces), which changed my mind on them. Relevant excerpts:

Since we can never make every form of discussion respect everybody’s triggers, that leaves two solutions. First, we can try the “my triggers are important, your triggers are invalid” solutions and end up with powerful groups able to enforce their triggers, and weak groups being told to “just man up”. Second, we can try the safe space solution, where not everyone can be certain of safety everywhere, but everyone is certain of safety somewhere.

Trigger warnings fight those who would like to be our masters in another way as well. They are one of our strongest weapons against the proponents of censorship. The proponents say “We can’t let you air that opinion, it might offend people.” Trigger warnings say “I am explaining to you exactly how this might offend you, so if you continuing listening to me you have volunteered to hear whatever I have to say, on your own head be it, and let no one else purport to protect you from yourself.”
Click to expand...

The wonderful people reblabbing the memes such as the one you saw seem to gravitate towards the "my triggers are important, fuck yours" camp (try telling them you know someone whose trigger is 'feminism' and see how they respond). I find that stance to be uncharitable, and I don't think going all the way to "triggers that seem silly to me are invalid prima facie" is any significantly different.

You have the right to self-police your internet. If someone on Facebook is sharing things that upset you, you've the right to ask them to quit it, unfollow them, unfriend them, etc. I've unfriended people for defending spanish fascism, and have unfollowed others for spamming my feed with "fuck cis men" claptrap. This is, in effect, tailoring my space to make it safer for me. If a friend asks you to not post pictures of dogs to your Facebook because they upset them, you can ask them to unfollow/unfriend you, you can stop, or you can compromise if the effort is worth it (e.g. create a permission group called Dog Pictures that excludes this person). If they proclaim that all pictures of dogs are bad because they're triggering to dog attack survivors, and you should feel bad for posting them, then by all means tell them to fuck off for making such a broad judgement.

IDK, I don't feel comfortable being the ultimate arbiter of who has thin skin and who's going to end up binging/purging for the weekend, but I do feel comfortable telling both of them to stop looking at my feed if it bothers them.

Staff member
"There is no health condition that is inherent to fatness" uhhhhh heh heh heh... actually, lady, there are several. Diabetes, heart disease, cancer, gallstones, infertility, even arthritis. An obese person is 60% more likely to develop arthritis than someone of normal weight.

GasBandit said:
"There is no health condition that is inherent to fatness" uhhhhh heh heh heh... actually, lady, there are several. Diabetes, heart disease, cancer, gallstones, infertility, even arthritis. An obese person is 60% more likely to develop arthritis than someone of normal weight.
Click to expand...

I had the same thought. That's like saying there's no health condition inherent to smoking. There's nothing that gets 100% guaranteed, sure, but otherwise, lady you're speaking nonsense.

GasBandit said:
"There is no health condition that is inherent to fatness" uhhhhh heh heh heh... actually, lady, there are several. Diabetes, heart disease, cancer, gallstones, infertility, even arthritis. An obese person is 60% more likely to develop arthritis than someone of normal weight.
Click to expand...

Sounds like another way of refusing to take personal responsibility and shift the blame to other people. It used to be "victimhood." Now it's a combination of "X shaming" and "X acceptance". It's always someone ELSE who is the problem.

Cajungal said:
I'm just getting really tired of watching people project their insecurities on everyone in the name of social justice.
Click to expand...

Exactly this. The funny thing is that many people who are sharing before and after photos are doing so for a very important reason: they are making a public commitment to pursue a difficult path. People who tell their friends and family they are or have changed their life in an important way are significantly more likely to stick to the change than those who never tell anyone.

It builds a system of mutual support.

For those who choose a different lifestyle it may seem like those who change are attacking them, but they aren't.

You'll see this with new vegans, people who've stopped smoking, and with people losing weight. Commiting publicly to the people who you care about and who care about you is very, very helpful in making the change permanent.

So this message is actually trying to remove a useful tool and aid from the public square, which isn't cool at all.