Hope and Change: How's that working out for you?

I can only assume that Obama literally killed MisterSteve's parents with a blunt object. I do seem to remember him being ok before Obama was elected, but since then I can only recall him ever posting to badmouth Obama. whatever. 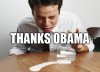 I like to think of him as this forum incarnation's Invader.

I bet Obutthole still has plenty of supporters here to defend him.
Click to expand...

Ah, I missed that caption. Classic.


OH SHIT STEVE, OBUMMER'S ABOUT TO SEIZE CONTROL OF THE COUNTRY FOREVER!

OH SHIT STEVE, OBUMMER'S ABOUT TO SEIZE CONTROL OF THE COUNTRY FOREVER!
Click to expand...

About time. Dude's got less than two months to get around to taking everyone's guns.

mroosc1979 said:
Bin Laden was killed under his watch.
Repealed DADT
Stimulated the car industry, creating 250,000 jobs.
Dodd-Frank Act.
New START Arms Control Treaty.
Paris Agreement (assuming Trump doesn't fuck it up).
Lilly Ledbetter Fair Pay Act.
Limited the effect of the recession on the US (go ahead, compare what happened there in the US to what happened in Europe. You coped much better).
Gave FDA authority over tobacco (seriously, how was this not already a thing?)

Yeah, I know I'm not including Obamacare on this list. Not because I don't consider it an achievement, but because I know you won't & you'd probably just dismiss any list that included it, so I left it off.

Frank said:
Ahh, it's Mr. Steve, literally the only person on this forum who's political views are less respected than CDS's.
Click to expand...

TIL Misunderstood genius is a synonym for neutered male.


OH FUCK. IT'S HAPPENING. THE END OF FREEDOM!

Frank said:
THE END OF FREEDOM!
Click to expand...

Don't give up hope yet.

An honest retrospective both today, and probably 6 months down the road with what he promised initially versus what happened, in full knowledge of what barriers he did and didn't have (ie: sometimes the democrats had both the house and senate, and other times not) would be a good thing.

And I'll reiterate what I've been saying since before he was elected: Everybody has poured so much of their hopes and dreams into Obama, there's no way he'll live up to it, because Jesus Christ probably couldn't live up to that level of expectation, so he'll be remembered for failing an impossible standard.

Any other criticisms of things he actually said/did are fair to evaluate on their own merits (or lack thereof), but 10, 30, 50 years later, beyond being the first President who wasn't white (as a half-n-half, I've always thought it odd that he was considered "Full black" for this purpose, but that's not my main point today) will probably be the main thing he's remembered for, and the rest of the term will probably be remembered as "disappointing." Not worst ever, not a horrific start of race wars, or the beginning of the road to health care for all, or anything else good/bad depending on your side of the issue. It'll be nebulous disappointment that can't be fully defined, or fully refuted either, and this will apply to those who supported him at the time too.

That's my bottom line. I predict he'll be remembered as Disappointing. That's it.

I think he'll be remembered as a bright spot in a 20+ year period of awful.

blotsfan said:
I think he'll be remembered as a bright spot in a 20+ year period of awful.
Click to expand...

He'll be the diamond in the goat's ass, between Bush Jr. and Trump.

Staff member
He doubled the national debt (after Dubya had already dubbled it). Let's see if Trump can trimple it!

Fivethirtyeight.com predicts (with arguably weak metrics) that he'll land as 12th "best" president when all is said and done.

MindDetective said:
Fivethirtyeight.com predicts (with arguably weak metrics) that he'll land as 12th "best" president when all is said and done.
Click to expand...

I don't have the ability to cross over to alternate timelines.


In all seriousness, I suspect you are making a veiled claim that Trump's election is an indictment of Obama's terms as president. Except Trump is the least favorable incoming president in history (less favorable than Obama's current ratings, I believe). Clinton (and, honestly, the Democratic party) is the one who lost the election. Obama won his terms. And his ratings have been increasing, not decreasing.

Nah it's a crack at fivethirtyeight's election predictions.

Covar said:
Nah it's a crack at fivethirtyeight's election predictions.
Click to expand...

Oh, gotcha. Well, Trump was within the margin of error there. *shrug* On election day they were definitely less certain than elsewhere of the final outcome (even though still pretty wrong.)

GasBandit said:
He doubled the national debt (after Dubya had already dubbled it). Let's see if Trump can trimple it!
Click to expand...

Well, the debt is going to keep rising as long as there's a budget deficit, and we haven't had a new budget since 2006, remember?

They didn't say Donald Trump had no chance to win, so...

I think they took a hit after the primaries, but they were nothing but cautious after they botched that. I don't think even Trump saw a win coming. That's what all the polling said everywhere.

They were the most trump-friendly election predictor of any real source.

MindDetective said:
I don't have the ability to cross over to alternate timelines.
Click to expand...

Oh, that question must be for me.

I've made seventeen jumps today (and boy are my legs tired), and Hillary won in none of the 15 timelines that had a USA. In #16 Adolf Drumpf was appointed Chancellor of Nazi Amerika and #17 was ruled by cats.

Actually, that was the first timeline I jumped to today - one of the furry fuckers got playing with my controller, and like a kid in an elevator, pawed all the buttons.

You're gonna own what's going on right now, Steve. So fuck you. Just fuck you.