[Webcomic] The Order of the Stick thread

IronBrig4 said:
They have been around since 1st edition, but DMs typically only use them in specific situations like the early game encounter. They are pretty much a one-shot monster.
Click to expand...

IronBrig4 said:
They have been around since 1st edition, but DMs typically only use them in specific situations like the early game encounter. They are pretty much a one-shot monster.
Click to expand...

They are one of those creatures that I felt they designed entirely to fulfill the fear of “everything is out to kill you”.

Shawn said:
They are one of those creatures that I felt they designed entirely to fulfill the fear of “everything is out to kill you”.
Click to expand...

Isn't it? Piercers, cloakers, mimics, trappers, ropers...I mean the only thing missing is an entire hall that's a monster.

Have you ever heard of a Gelatinous Cube?

PatrThom said:
Have you ever heard of a Gelatinous Cube?

Well, all of the things I listed are camouflaged monsters. Stalagmites, Satalgtites, doors, chests, cloaks, floors. I feel like they convey the "every item here is a monster" better than a cube does

Could a mimic get large enough to become an entire house?

Edit: a quick googling and perusal of a few relevant sites tells me: YES.

They are generally an off-shoot called House Hunters, but they are essentially the same thing.
Last edited: Oct 6, 2021

General Specific said:
Could a mimic get large enough to become an entire house?

Edit: a quick googling and perusal of a few relevant sites tells me: YES.

They are generally an off-shoot called House Hunters, but they are essentially the same thing.
Click to expand...

In Ravenloft there are a few examples of haunted houses where the house itself is the main antagonist rather than the creatures that dwell within it. The recent Curse of Strahd adventure has such a location: known affectionately as "the Death House".

Oop. What did V get hit with now?

Good to see V is back to their talkative self.

ThatNickGuy said:
This isn't about a new strip, but it's related to Order of the Stick.

Awhile back, there was a guy in the comments of the Order of the Stick Kickstarter. He spammed every post with "Please explain your absence from this date to this date," relating to Rich Burlew saying in a previous update that he would post again on a specific day. And he missed it. Which, you know, it happens. No biggie. But this guy seemed to take it ridiculously personal, posting over and over "Please explain your absence..." not just in the comments, but harassing Rich about it on Twitter. He then went on this crusade about Rich making up his thumb injury. His evidence being that the art style changed to something more demanding, which is ridiculous for someone to do with a new, permanent disability that affects their output.

And I just discovered the guy is not only still going on this crusade, but made a new Twitter account specifically to "call Rich out." And is claiming he was banned on the forums because of his disability (autism). When it was Rich was just sick of him making incredulous accusations.

Sorry to disappoint anyone who sees this and thinks there's a new comic update today. I pop onto the Kickstarter page once in a blue moon to see if there have been any updates on the backer fulfillments. Sometimes, I'll check the comments.

Remember this guy from three years ago? I got into LONG arguments with this entitled jerkwad, trying to get him to understand that he's being incredibly unreasonable about his "crusade" against Rich isn't going to get him unbanned. At one point, he said if he stopped his crusade, he would kill himself, which I did not respond kindly to.

Well, he's been active on the Kickstarter comment section. In fact, he's one of the few that still comments at all. And he's STILL claiming that he was banned from the forums because of discrimination.

And now he's proclaimed himself the "primary stakeholder" (lol) and the "voice of the Kickstarter backers" (lol). He's making ultimatums and setting deadlines once again. This time, he's even lumped EVERYONE who backed the campaign, saying "absence of a reply will be considered an endorsement of my platform and thus will show that you support the course of action suggested." 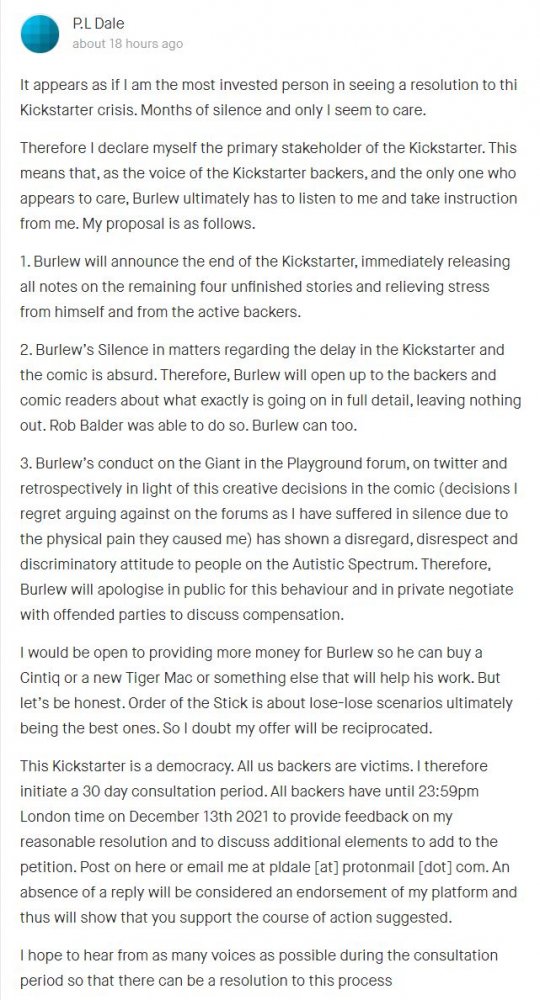 EDIT: And I responded to him. I was sick of his shit three years ago, but Jesus Christ, he hasn't stopped. When he said he found RIch's home address a few years back, I actually contacted the OotS forum moderator and shared all the screenshots of the things this guy was saying. I don't think they did anything with it, but with this guy now saying "we" should take "militant" action (in another comment)? As I said to him, if I knew him personally in real life, I would report him to someone, even psychiatric care.

This was my response:


"Sorry, but no. You don't speak for us. You're the same guy who created a Twitter account to go on an inane attack campaign against Burlew and made ridiculous accusations and demands against him. Remember how you pretended to be someone else on the forums while simultaneously "calling out" the garbage you peddled on here, like trying to contact the local authorities and newspapers? Remember how you claimed Burlew faked his thumb injury and your "proof" was calling all the local hospitals in his area (as if they would release personal patient information). Remember how you said you found his address? Or has various "phases" that included asking other webcomic creators to get on board your "crusade"?

For those unaware, PL Dale is also Sunken Valley, who was banned on the forums because he continuously spread misinformation and making false accusations on here. And then had the gall to post as Sunken Valley and acted like it was a different person.

A few years ago, we got into LONG private arguments on Twitter about this. I tried to make him see reason, but he really believes his nonsense. He was not banned because of his autism. He was banned because of the lies he spread on here and then attempted to carry over to the forums, pretending it wasn't him. Nowhere in his banning does autism enter the situation. And yet despite all these years later, he's still touting that as the reason.

Does it suck that Rich hasn't updated the Kickstarter in nearly a year or hasn't fulfilled all the backer promises? Absolutely. But making ultimatums AGAIN after the last time that shit failed is ridiculous. What will you do? Start doing Twitter posts again from @TruthOotS, making demands and ultimatums? Saying an absence of a reply to the thousands of people who don't even read these forums is an endorsement to your ridiculous attack campaign is not only childish but not legally binding. Fuck off with that shit. Same with all the other childish shit you've done in the past about this. You're mad the promises haven't been fulfilled. I get it. A lot of people are mad or disappointed.

But saying you need to be more "militant"? Do you even understand what "militant" means? Combative/aggressive in support of a cause, typically favoring extreme VIOLENCE or confrontational methods. On top of stalking Burlew by finding his home address, do you have ANY fucking clue how dangerous you sound right now? If I knew you personally in life, I would probably report you to someone, even if it's just psychiatric care.

You have a right to be angry about not receiving your campaign promise, which if I recall from our conversations, was a crayon drawing. But you have continued to make inane demands and STILL continue to make accusations of discrimination when it's your conspiratorial bullshit that got you banned.

I think "Fuck off Dale" was all you really needed to write.

Krisken said:
I think "Fuck off Dale" was all you really needed to write.
Click to expand...

That was the "tldr;"

Tinwhistler said:
That was the "tldr;"
Click to expand...

What can i say, I'm getting too old not to jump to the gist.

Okay, NOW we get an actual update to the comic.

I never knew V was that much of a basic bitch.


(no slur intended against V, female dogs, or basic bitches)

They're popular on "Yelp!"

Staff member
Razor, I choose you!

Guess we have to wait until next episode to know if this move is super effective.

figmentPez said:
Razor, I choose you!

Guess we have to wait until next episode to know if this move is super effective.
Click to expand...

I'm convinced it's going to be super effective.


Whether it'll push her OUT or drag her IN is another matter.

In which Belkar detects a pattern.

In which Elan makes N-1 friends.

There was 11 of them. No mortal could resist.

Celt Z said:
There was 11 of them. No mortal could resist.
Click to expand...