rac3r_x said:
what the hell happened to Joseph Gordon-Levitt didn't even recognize the kid?!?
Click to expand...

According to TV Tropes, they put a lot of make-up on him to make him look more like a young Bruce Willis. Which I like a lot more than the standard Hollywood method of casting people as younger versions, the "Who's gonna notice?" method.

Wow... Looper looks amazing!
Also very excited about A FAntastic Fear of Everything.

At first I was ehhhhh.

Then I got into it.

evilmike said:
I keep wondering why they didn't just install the landing pad upside down over the blast furnace. Seems like it would save a few steps in the process.
Click to expand...

True, or better still on the Moon, *gasp* *pop* all done.

I took a screengrab from my facebook that is relevant: 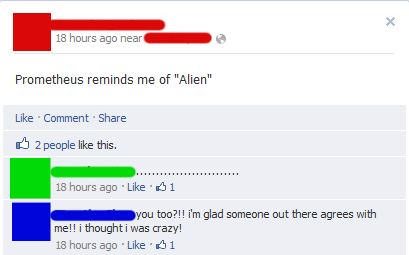 I'm still not sure if they were joking or not. I really hope so.

That's the one. Wasn't on Youtube when I posted but I figured it wouldn't take long.

I'm having so much trouble getting excited for this new Spider-Man movie. It just doesn't seem Spider-Man-y to me. At least in the trailers for this one he's actually cracked a couple of quips, unlike the Sam Raimi ones. but the Sam Raimi ones somehow managed to capture a level of playfulness to it all that nothing I've seen from this seems to convey.

Avengers looks fun. This looks like Spider-man is SERIOUS BUSINESS.

I'm still going to go see it though, if I can get anybody to come with me. Trailers often tell lies.

Staff member
I was just coming in here to say this spidey is on the wambulance. I realize he spent a great deal of time on it in the comics, but he also had a lot of levity and enjoyed his superpowers... a balance that Raimi and Macguire did well.

Staff member
That being said, A) this confirms my theory that the studio is going to start pumping out more fantastical superheroes again, and B) it's visually gorgeous.

I had zero interest in new Spidey based on the first trailer. Then some interest with the next trailer. This latest one has pretty much sold me. Didn't think that would happen.

My interest has definitely grown, but I'm way more excited about the Avengers and Dark Knight Rises. And I'm a huge Spider-Man fan.

If it's possible, that one looks even more outrageous than the first one.

Lets hope it includes some kind of plot as well. I was bored to death but the first one. Maybe I needed to see it in a theater with buddies to enjoy it rather than at home with Skyrim as an option if I chose it.

Having gotten into lacrosse this year, I'm actually kind of interested to see this even though it looks a little cheesy:


And I generally like sports movies, even when they're about sports I don't find particularly interesting, like baseball or football.

That's a pretty rad piece of history. I hope it isn't revised too heavily.

That "Safety Not Guaranteed" trailer was disappointing. I had been hoping for a wacky time-travel story, not a quirky indie rom-com.

However, "Argo" looked awesome. A quick check of Wikipedia reveals that Jack Kirby will be a character in the movie - he provided concept designs to help "sell" fake film - and he will be played by Michael Parks (Red State, Grindhouse, Kill Bill, From Dusk 'Til Dawn, Smokin' Aces 2: Assassin's Ball, Then Came Bronson). No part of that is not awesome.

yeah... They're gonna take my money.

Then it was neither.

Argo:
That looks REEEEEEEEEEEALLY good.
Also I guess that's the movie Kevin Smith was talking about Ben Afleck stealing away half his cast from Red State for.

As a huge fan of Les Mis, I'm torn on this. A big budget adaptation of the musical is my crack cocaine, but if the singing is anything like the trailer I'm really hesitant.


Compare to the original London cast 25th anniversary, I still get chills.

I don't think they've overdubbed the trailer (maybe? I hope?), but Anne Hathaway just doesn't seem like a good Fontine.

That's one of those musicals that I really regret not seeing early in its Broadway run or in London at any point in time. I saw it in 2003 when the Broadway version was on it's nth cast, and by that time you could just tell everyone was tired and going through the motions. Was a real pity, because I liked the music.

I thought the trailer was pretty good.

LittleSin said:
I thought the trailer was pretty good.
Click to expand...