It's so fucking pathetic I don't even want to bully Elon anymore, he must have a secret humiliation kink.

It does piss me off that I have him blocked on Twitter yet can still see his fucking posts every time someone I wish knew better retweets him. WHY IS THAT?
Click to expand...

I see so much right wing stuff now and it's driving me crazy. It was already annoying enough to get bombarded constantly with random people I don't follow and now it's 100x worse.

Staff member
It's amazing too, how much that post on "Managing" Elon reminds me of all the special things I had to do at the radio station to make sure the owner made the right decision about things. And of course, as soon as I was gone, he was back to making dumbshit decisions again. Well, more dumbshit decisions. I couldn't stop the dumbshit decision that prompted me to find another job.

Well, he's having a poll to decide whether or not to reinstate all the pieces of shit formerly banned, meanwhile prominent leftist accounts are being outright suspended for apparently nothing. Fuck Twitter. Can't wait for the bankruptcy.

Staff member
Whoops. I just posted the SpaceX story. I didn't realize I'd seen it here.

Two great videos posted today. Adam Conover's video covers not just Musk, but Zuckerberg and some crypto guy I've never heard of (because I don't pay attention to crypto shit). But a large chunk of Adam's video is on Musk.

Staff member
I'm still waiting for someone to explain Mastodon to me. Not even "explain Mastodon in a way that makes sense". All I know is that it's a social network that... uh... has some sort of decentralized structure? But I've NEVER seen anyone try to explain it beyond that. No one has told me what sort of posts it allows. No one has told me why they chose the "instance" they did. No one has tried to explain what sort of moderation it has. No one has tried to explain anything about it other than that it exists. I've seen ONE article on how to DM someone on Mastodon, which I didn't read because why would I want to DM someone on a service I know nothing else about? And if DMing someone is so difficult it needs a guide, why do I want to be on that service?

I've picked up bits and pieces here and there, but everyone talks about it in super vague terms. Like, apparently some instances won't talk to all other instances, but I've not heard anyone say why/how that would happen.

It really says something to me that there isn't some YouTube video or single webpage that is "An Introduction to Mastodon". Like, I could introduce you to everything you need to know about Tumblr in like a 10 minute video, and you could stop watching after two minutes if you only needed the basics. What the hell is going on with Mastodon that you can't explain it that simply?

figmentPez said:
What the hell is going on with Mastodon that you can't explain it that simply?
Click to expand...

I honestly don’t know, because I don’t think I had heard about Mastodon prior to Twitter 2.0.

PatrThom said:
I honestly don’t know, because I don’t think I had heard about Mastodon prior to Twitter 2.0.

Staff member
Okay, here’s what I figured out so far:

Mastodon has no central server or “instance” like Twitter. Each server is administered independently by different people with no real “boss.” Users choose a server and join it. They can see the other users on their server, but not on other servers. However, you can search usernames and it brings them up even if they’re on a different server. That way, you can still flow them. You see what they post or reblog and can respond to them like on Twitter. Reblogging seems to be the most effective way to find new people to follow.

I chose the .social server because it’s the one created by the Mastodon founder and therefore the one least likely to be shuttered. I’ve still found most of the people I followed on Twitter provided they had similar usernames or shared them elsewhere. (Like Twitter)

Staff member
Is Mastodon more complicated? Yes. At first. Can it be taken over by an egomaniacal billionaire man-baby who kisses alt-right ass? Nope, and that’s real damn nice.

With blackjack! And hookers! 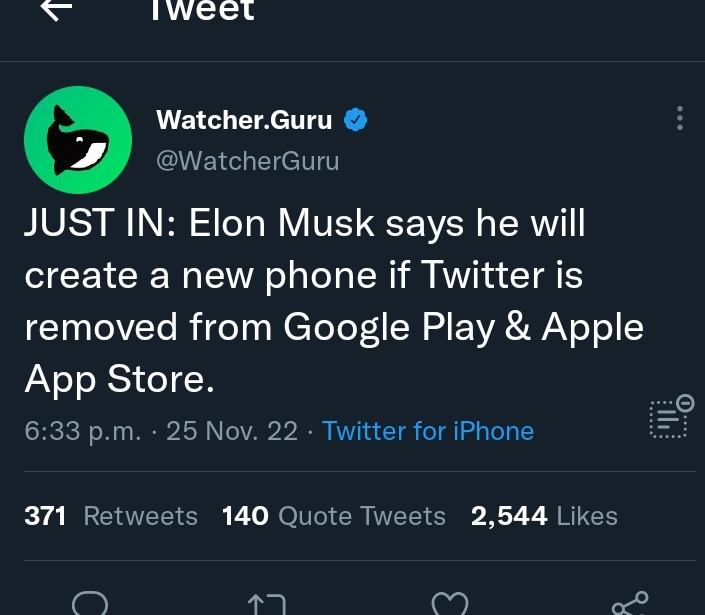 Ever since Musk took over I have really been wishing I could leave Twitter. I don't want to support the douchebag but I rely on Twitter for my content. It's my highest followed social account after Tumblr decided it didn't want me around many years ago.

So I feel super stuck right now in the dungeon of an insufferable troll.

—Patrick
(Who apparently knows WAY more about what it takes to design a working cell phone than Mr. Musk)

Staff member
You know he’d just find a small independent company with great ideas, buy that company, and then claim he invented the technology.

Does he like losing money? Is this a kink for him?

Staff member
Not when he can manipulate the market. Dude still has billions. He’ll ride this wave through then when things settle down he’ll make some sort of statement that makes his stock climb, then he’ll sell. When the price inevitably crashes he’ll buy those shares back. He’s done this several times already.

Dave said:
You know he’d just find a small independent company with great ideas, buy that company, and then claim he invented the technology.
Click to expand...

Judging from his brilliant decisions of late, he'd just buy Blackberry and call it the MuskPhone(tm)

I finally found the thing that will make me quit Twitter.

PatrThom said:
I can’t wait for all the mock-ups of what such a PhoneX might look like.

PhoneX will be the first touch free phone!
PhoneX will be all digital and also the Blockchain
PhoneX will come with slurs programed into predictive text
PhoneX users will see messages and deep thoughts from Musk at least once a day. Responses will limited to thumbs up emoji
PhoneX will be the only phone you can pair with your Tesla
PhoneX will have reception on Mars
PhoneX will take no action to censor free speech
PhoneX will closely monitor your posts for dangerous threats such as "unions are good" and "fascism is bad" and report such threats to the nearest proudboy group

Musk is suspending accounts at the behest of Andy fucking Ngo, Twitter is an apparatus of the Nazi party now.

So, just the Burlington Coat Factory, then.

It is a little early for Spirit Halloween. 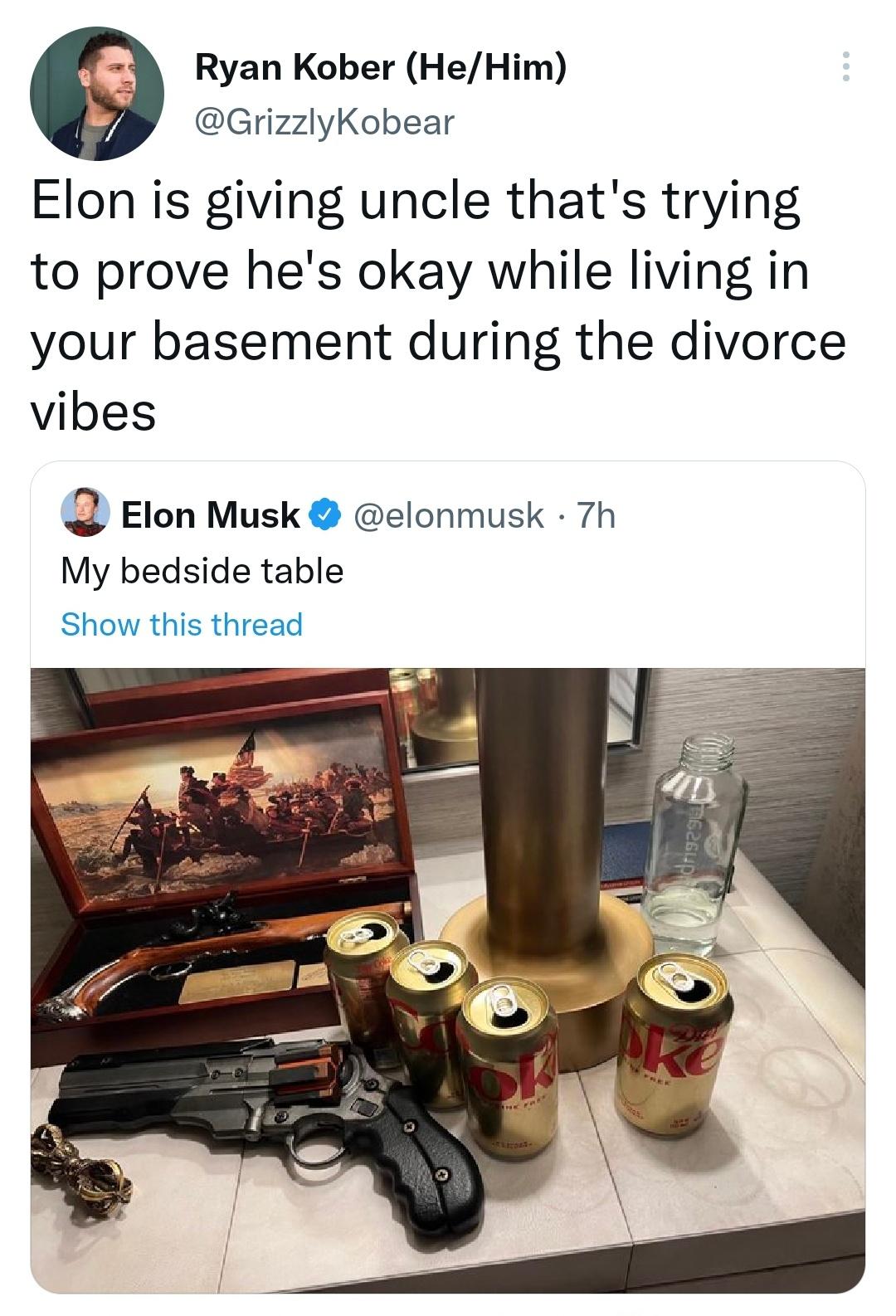 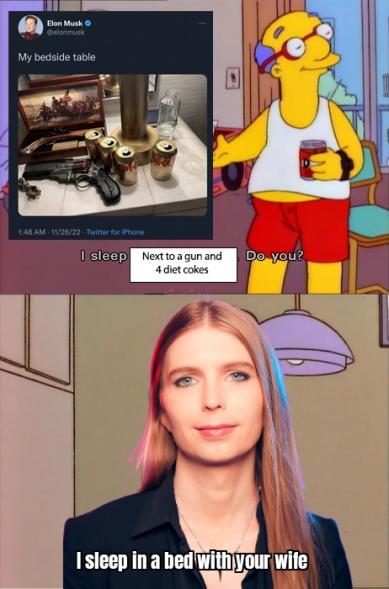 pretty sure that's not even a real gun

Tinwhistler said:
pretty sure that's not even a real gun
Click to expand...

There are two guns, and probably neither are real 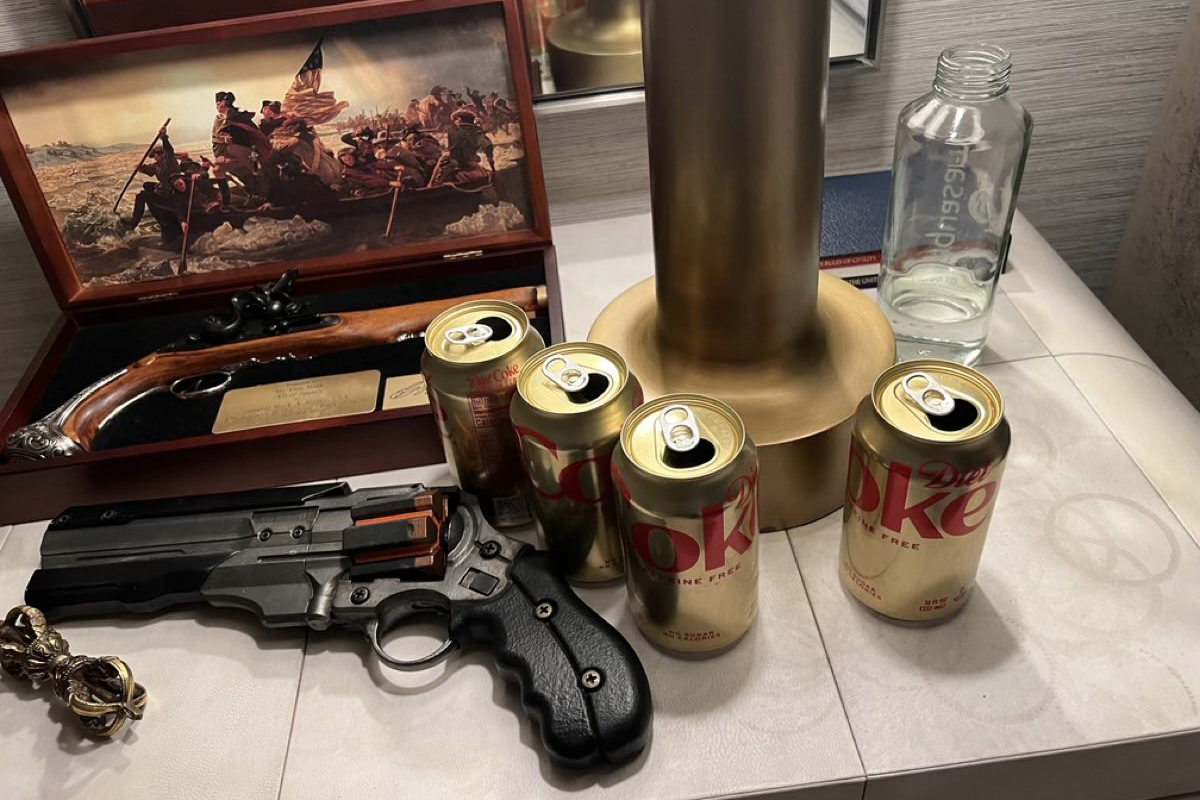 The Elon Musk Guns: What We Know So Far

Twitter recently got a look at the ”Elon Musk Guns“ — two “handguns“ the billionaire keeps at the ready on his bedside table.

GasBandit said:
There are two guns, and probably neither are real

The Elon Musk Guns: What We Know So Far

Twitter recently got a look at the ”Elon Musk Guns“ — two “handguns“ the billionaire keeps at the ready on his bedside table.

The flintlock didn't really provide any evidence to me one way or the other, but the other 'weapon' had a lot of features that screamed 'prop' to me.

(edit: Though I suppose if I'd ever played the video game the gun is modeled after, I'd have recognized it from the game, rather than using my personal gun experience to go "uhm, that's not a gun")
Last edited: Nov 28, 2022

Of course Egon Stink would have an anime ass prop gun.

Frank said:
Of course Egon Stink would have an anime ass prop gun.
Click to expand...

There's nothing wrong with having an anime ass prop weapon.

Expecting people to be impressed that you sleep with it by your bedside however is a bit chuuni. 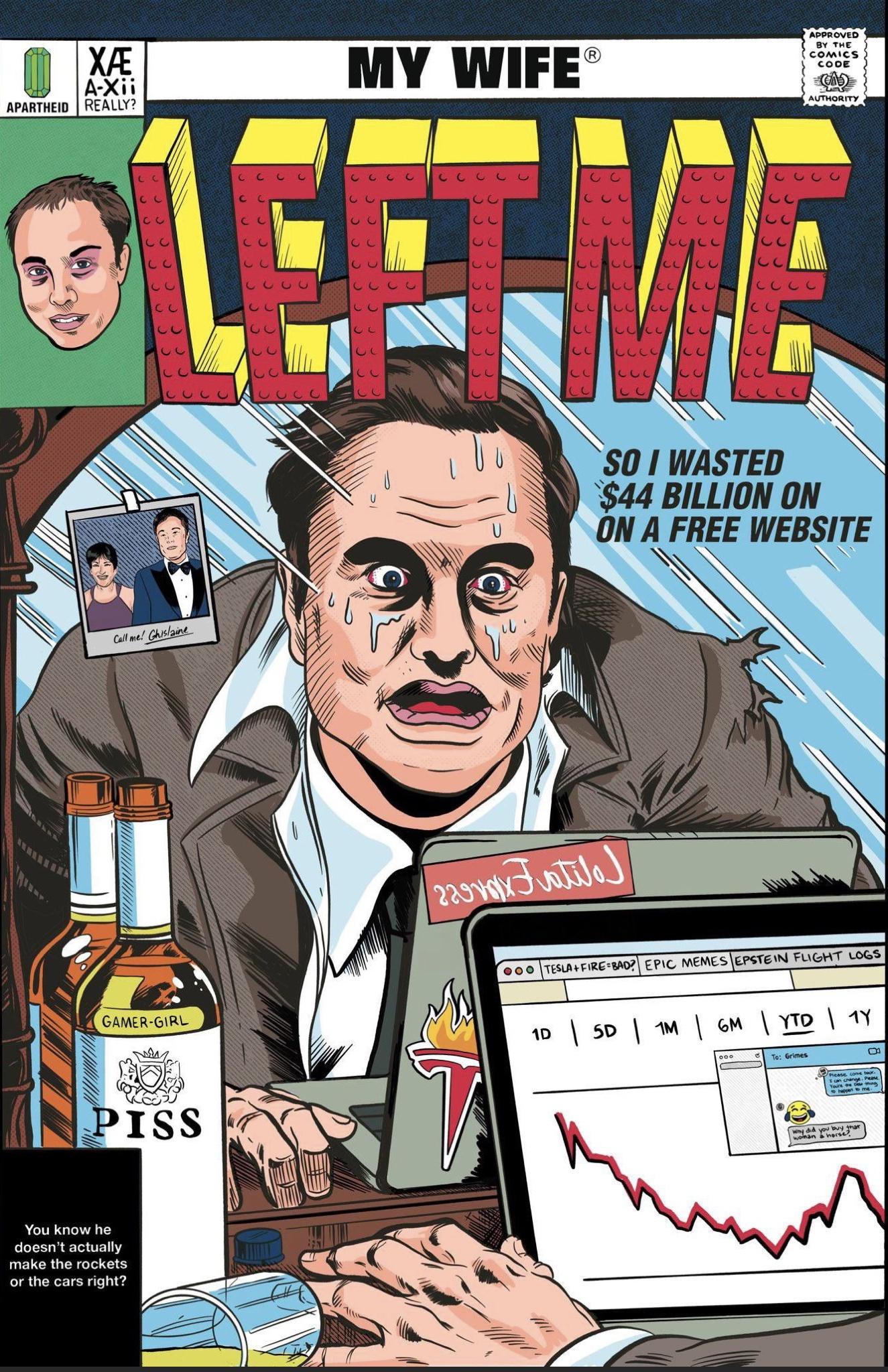