I've logged in. Seeing who else is showing up.

Sorry, guys. I just got back a little while ago and I'm dead tired. I hope you're having fun!

Celt Z said:
Sorry, guys. I just got back a little while ago and I'm dead tired. I hope you're having fun!
Click to expand...

Do you think rapping robots is fun?

I mean, it is for some people: 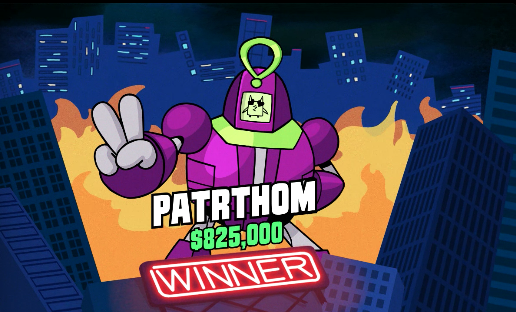 Staff member
Jackbox is OVER. FOREVER.

Are we still doing the first Friday? If not, can I request we do 2nd Friday like we have done the previous few times?

Cobra_Royality said:
Are we still doing the first Friday? If not, can I request we do 2nd Friday like we have done the previous few times?
Click to expand...

Works for me, if it does for the rest of you.

So far, it works for me.

I will be unavailable Friday the 1st.

I have some plans but it is possible I might be able to join later.

Of course now that it is today, I won’t be home until after 9p.

Looks like Rappin’ Robots is back on the menu, boys!

I'm not sure if I'll be around today or not, BUT the new pack comes out on the 18th. We could postpone 2 weeks or do a second night this month.

If I make it, I'll be late. I've got about 6 weeks of lessons from my musical hero, Kevin Crawford, on Fridays

This is my take as well.

Whatever works for you guys!

Did we want to do the second week this month because of the Jackbox release? It's out today, so we could do it tomorrow.

i'll be unavailable unfortunately. Maybe join later in the night.

Staff member
I won't be getting home from work until after midnight tomorrow.

It might be better to try next week then.

Next week, yeah. Jun's coming to visit this weekend.

Aww. I'm off all weekend.
Of course, it's because company is coming and it's college reunion time and I have to take the car in plus I have an eye appointment...
...ok maybe now's not the best time.

I'm actually not going to be around this Friday because the last HS home football game of the season is Friday and my daughter's in color guard soooo.

Staff member
I don't mind putting it off again. Next week is the last week of the month though, so do we want to rather wait until 9/5 for the regularly scheduled Jackbox night? I don't know that we have the passion to do 2 weeks in a row these days.

What about Saturday instead?

Whichever is fine for me right now. 11/5 is the only Friday coming up I won't be available.

Well my schedule for the next few weeks is the following:

I can do this Saturday or next Saturday (but not Friday 10/29). I can do 11/5 or 11/6. I can't do the Friday after on 11/12 because I have a Residency interview in Cleveland on that Saturday morning. After that, I can do the following Friday, 11/19 which is right after my boards.

If you play tomorrow I'll be about an hour and a half late. Same with the following week. I'll join if people are still around.

I got a chance to play the new Jackbox pack yesterday though. So I thought I'd mention some details about the games and share my thoughts.

Drawful Animate: It's Drawful basic rules, but you get two frames that you can draw a simple picture with and let you try to animate the weird phrase. It's fun. There is a lot of potential here for folks to have fun with their animations.

Job Job: As mentioned above it's a game where you answer generic icebreakers and then use the words from the answers of other people to answer job-interview related questions.
Also a lot of fun, especially if you like ransom note grammar.

The Wheel of Enormous Proportions: This is a trivia game that incorporates some generic chance. You complete trivia to earn slices of a spin wheel that can earn you points. Once someone has enough points they spin the winner wheel. If they don't land on a winning slice then the game continues.
I'm not a fan of this one. I'm not especially good at trivia either way but this one seemed especially hard. Most of the questions have several right answers (like 6 or more) and probably about 12-14 answers to choose from. You get points for each one you get right but lose them for each one you get wrong.

The Poll Mine
A Dungeon Delving themed polling game where the group is divided in teams. Each round everyone gets the same question and then ranks the available answers (first round is your top three, next is your top four, etc). Then each team gets a chance at opening a door to try and guess which of the answers was ranked the highest amongst the group. A good door wins you torches, a bad door takes away a torch. But there is a twist: On subsequent rounds the good doors are based on different rankings (such as 2nd through 4th only). The team with the most torches at the end of the game wins. Talking amongst teams is encouraged.

Weapons Drawn
This game will be the bane of Keltsy, myself, and anyone with some clear styles to our drawings. You play as detectives/murderers who are trying to murder the guests of the other players. Before you complete the murders you are given a pair of weapons to draw. The catch is that a letter of your name is given to you first and you must use it as part of your drawing (you can twist it, shrink it, etc).
We vote on cases and someone will be elected as the lead detective and be able to zoom in on elements of the weapon found. For comparison the group will be given the other weapon drawn by the murderer, but also 3 from random players. As a group you are to discuss who you think the murderer is (or deflect if you are he/she) and then make your guest individually. You get points for the murders you solve and the ones you get away with.
Fun but again this is one where you really have to downplay any artistic skill or you'll just be easy to catch.

Not this month - Birthday dinner!

Staff member
Celt Z previously said she can't make 11/5, and my ability to make it is iffy - I might be late due to work having me 50 miles away friday. I PLAN to be home that evening... but sometimes shit happens that means I don't get back until after 8.
Show hidden low quality content
You must log in or register to reply here.
Share:
Reddit Pinterest Tumblr WhatsApp Email Link
Top